More than ever this year I find myself coming up against Facebook memories.  You know, the ones that pop up and remind you of how many years ago it was since something nice happened, like meeting up with people in crowded places pre-Coronavirus, memories of family, friends and moments passed, gatherings that now seem impossible: sweaty pubs, dinner parties, concerts, crowded classrooms, in person meetings, nights out with colleagues and, of course, theatres and cinemas.

If going to the cinema and sitting in crowded rooms seems a lifetime away, watching television is something that has become increasingly familiar.  Pandemic bingeing is the new box-set bonanza and, for many, a lifeline to the outside world.  Never has  television viewing meant so much to so many and yet, ironically, 3 months into the pandemic and television drama production could be under threat while the BBC has begun a series of swinging cuts to regional staff as well as possibly axing BBC4.

These news stories fill me with horror as my life and memories are punctuated by compulsive television viewing.  Like many, I use TV to distract from real life as well as to enrich it.  I only need to read about a television programme and the feelings and emotions associated with it are instantly aroused.  For example, any number of Andrew Pixley’s blogs about television (too many to link here – just put his name in the search bar above) will prompt a rush of memories and an email flurry between us as I bore him rigid with memories of The Clangers and watching TV with my dad, how his blogs are going to be used in my American TV history classes and just why this particular blog made me cry.

John Ellis’s blog about Broadcast TV in a Crisis had me weeping (I must admit to crying at the drop of a hat at the moment) as it reminded me of the British TV that I still so badly miss.  It also made me think of the way watching television during the pandemic has united and sometimes divided families (see John Ritchie’s blogs here, here and here).

In fact, one of the very few good things about this lockdown – in addition to the planetary pollution pause – is the sheer amount of really good television we have been watching and, at CSTonline, the variety of excellent blogs we have received.  Take Elke Weismann’s wonderful contribution that introduced me to The Room Next Door, Matt Hancock’s Daily Briefing and all things Dominic Cummings:

And not to mention the programme’s take on Trump’s Disinfectant Claims which actually made me cry with laughter (yep, crying again):

It takes a lot to make me laugh about politics at the moment, but The Room Next Door totally does it for me.

In addition, Elke’s post made me think about the way TV functions in our lives (both now and in the past), as she comments on how pandemic TV is a great leveler: reducing hierarchies ‘that structure contemporary life’ as ‘we start to relate to … celebrities as fellow pandemic lockdowners’.  A subject that Liz Guiffre’s recent blog also taps into when she talks about Staged.

In fact, looking back over the vast amounts of blogs we have received over the past few months I realize that not only are we lucky to have had so many people writing for us, but that the contributions have come from across the world.  Without Liz writing about Australian TV I would never have even known about At Home Alone Together, let alone how to meet a younger man post 60:

Without the blog series coming out of the Reaching Young Audiences project, I would have no awareness of the Danish web series, Centrum, or the popularity of singing series with the Danish viewing public.  I’m also pretty convinced that I would have had no idea of how The Goodies had been repeated umpteen times on Australia’s Broadcasting Corporation.  And, maybe, just maybe, if Victoria McCollum had not written her blog about why we should be watching Parks and Recreation during the pandemic Michael Schur would not have written a pandemic special of the very same show.  Well, maybe he would. Still, the synchronicity of that blog amazed me.

In the past few months, CST bloggers have brought us astonishing insights into international television, how TV has been traded globally both past and present, what the television archive means for us (which may take on a whole new meaning post-pandemic), what it means to succumb to Netflix in Mexico and how that same streaming service encourages families to watch TV together.  We have also been given insights into Scandinavian Slow TV for children and how programmes about death take on a new meaning when watched during a pandemic (here and here).

And I haven’t even mentioned Tiger King yet.

Suffice to say, there isn’t much that we haven’t covered on this website since the Coronavirus pandemic locked us down into our isolated television viewing madness.

Over the years I have been so proud to read every single blog that has appeared on this website – the variety of approaches, the amount of different voices and the sheer hard work that has gone into these contributions week in week out takes my breath away.

As this is the last day for CSTonline until we kick off again on 4 September, I wanted to take a moment to pause (much like nature has over the past few months) and say a big thank you to everyone for continuing to write for us.  You do this freely (and for free) and I don’t think I have ever expressed the gratitude I feel for your continued support.

So, excuse the cheesiness but, …

While I’m at it I’d like to especially thank contributors that have been there since the very beginning of CSTonline. Jonathan Bignell, for example, whose blog on the first Bond beautifully chimed in with my teaching last semester; Toby Miller whose blog this week is, as usual, timely and pertinent and John Ellis, who appeared on the CSTonline re-launch in February 2011 writing from Philadelphia – a mere 20 minute drive from where I live now.  What goes around comes around and I am reminded that CSTonline has been in its present form for nearly 10 years with amazing support from a variety of people.   Douglas L Howard and Gary R Edgerton are among those that I haven’t mentioned yet but have been with us since the start. As has Richard Hewett whose last blog on being locked down in Muswell Hill, you guessed it, had me blubbing with homesickness, again.

Talking of old familiars, ECREA continues to supply the site with regular international blogs such as these from Berber Hagedoorn, Manuel José Damásio and Sarah Arnold.   Without the editing skills of Elke Weissmann and David L Palatinus, my job here would be so much harder.  And, on that note, a HUGE SHOUT OUT to Tobias Steiner for supporting me over the past few years, making sure the website runs smoothly and giving me regular sage advice beyond just the technical know-how.

There really isn’t enough room to thank everyone.  I haven’t even mentioned the editorial board of Critical Studies in Television and especially my collaborator and partner in crime, Janet McCabe, who continues to helm the journal brilliantly as well as Christine Geraghty who, along with Richard Hewett, deals with the book reviews.   In fact, let it be known that if you aren’t mentioned here, it isn’t that I don’t appreciate you and that your contributions are not valued.

While I’m on the subject of Critical Studies in Television, I’d like to take another moment of your time to mention that we are going to publish a series of short essays or ‘Provocations’ about TV studies in the age of COVID-19 in the Winter 2020 edition.  We couldn’t let this historic moment pass without marking it in some way.  Not only have we contended with the pandemic, but we’ve had #BlackLivesMatter and the appalling events that led up to the recent protests across the globe.  What a year it has been.  We would therefore like to invite you to send a provocation into the journal for consideration.  Some themes we’d like to address (but, of course, this is not exhaustive) are:

Finished articles of around 1-3,000 words should be submitted by the end of August to our submission site.  Details Here.

And, before I sign off, I wanted to go back to a problem that has plagued me since arriving in America last September.  I was relieved to read that, according to Cathy Johnson at least, I am not alone. For even if TV viewing has surged during lockdown – it has become too technical for some. On that final note I want to reassure everyone that I have, at last, learned how to turn the TV off. [1]

Until September, keep safe and have a good summer.

Kim Akass is Professor of Radio, Television and Film at Rowan University. She is co-founding editor of Critical Studies in Television: The International Journal of Television Studies, co-series editor of ‘The Reading Contemporary TV’ series for I.B. Tauris (now Bloomsbury Academic) and is managing editor of CSTonline. She is still working on her monograph: From Here to Maternity: Representations of Motherhood in the Media and is stranded in the USA because of Trump’s travel ban.

[1] Literally in the last week.  I’ll say it again, technology is not my friend. 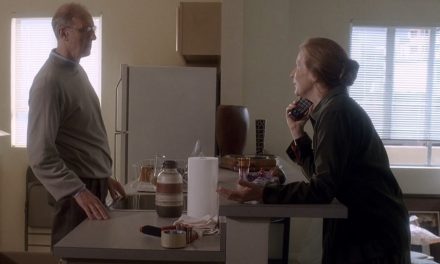 A REDEFINITION OF FAMILY: SIX FEET UNDER AND BIG LOVE (PART 3) by Andreas Halskov

FROM RAMSAY STREET, WITH LOVE by Liz Giuffre