You know, fan conventions and academic conferences are very similar really. You sort of feel the same enthusiasm crackling when you walk into the reception area, and know that you’re going to be surrounded by people with whom you can engage directly because they’re speaking the shared language of the sub-culture. And there’s often great guest speakers and neat screenings. As I get older, I suspect that conferences are better for my needs than conventions. I miss the fanzine room and the spectacular cosplay of others, but I now welcome the regularly scheduled breaks and the supply of tea and biscuits.

My wife and I always feel slightly guilty attending academic conferences. We treat it like a holiday, whereas everyone else is there to deliver important papers with important thoughts to secure important profiles and important citations to lead to other important research in an increasingly important career. For us, it’s a bit like televisual Center Parcs crammed with stimulating delights – only instead of choosing between cycling and water chutes[i] it’s opting for either Bird of Prey (1982) or Alan Plater between fixes of tea and biscuits. 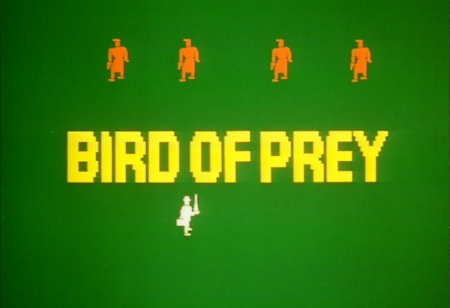 Fig 1: Please can somebody get Dave Greenslade to release his score for this?

What we did learn quickly from our first day was how – coming from the fan background and dabbling in professional publishing – our access to material seemed to be easier than it was in academia. In the 1980s, there was this wonderful fan network of videotapes being swapped and copied around the world – from episodes of The Fugitive (1963-1967) taped in other ITV regions to UFO (1970-1971) assignments from Australia via camera copies of Doctor Who (CCYY) from Canada. Via the shared enthusiasm of industry contacts from documentaries and magazines, we sort of know that most of the time if the material exists then a few chats with old mates will probably result in a screening being arranged somewhere or other.

If the material exists. That’s the first hurdle. For American shows, it’s comparatively easy – given the move towards film for many shows in the 1950s. Tape… that’s a different matter. The UK loved its taped shows, but they could be taped over. So, research into British shows from the 1950s to 1970s is a bit of a minefield. Will it be there or won’t it?  As something I’ve been very aware of for decades, it’s something I check at the start of each new project. Academia seems to make less use of this. 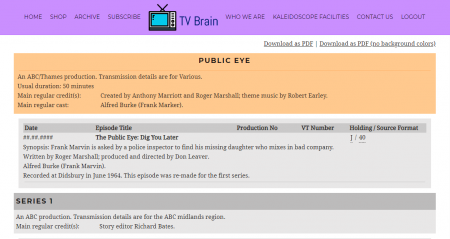 Generally, my first port of call is TV Brain, a massively useful database run by the Kaleidoscope television preservation group which contains listings for thousands of British TV shows. Since the 1980s, we’ve used similar lists of archive holdings. Has it been wiped? Do inserts exist?  The detail’s expanded over the years to embrace other handy data – production/VT numbers (clarifying production sequences), pseudonym identification (handy for spotting patterns), notes on regionalisation (an-oft overlooked area of fascination) and a super way of tracking creatives’ careers.

In fact, last time I recalled devoting part of my misspent undergraduate tenure to deriving ATV transmission dates for Randall and Hopkirk (Deceased) (1969-1970). Well, the other day I got a call from my old friend Simon Coward. Terrific bloke. Met him in a corridor at the Griffin Hotel in Leeds at the Fan Aid North convention on 2 November 1985, we got chatting about our shared passion for Thames’ telefantasy gem Ace of Wands (1970-1972) and we’ve been working together ever since. Much like meeting Dr Victoria Byard in the Reading car park and talking about Sky.

Anyroadup[ii], Simon says to me: “Hey!  Do you remember that we never found two episodes of Randall and Hopkirk (Deceased) in the ATV listings?” And, naturally, you do; like first dates or starting a new job, being unable to find a regionalised airdate really lodges in your cerebellum. Or so I find. Anyway… “Absolutely,” I said, “A Sentimental Journey and Could You Recognise This Man Again?” “Well,” he says, “They did go out in June 1970 as replacement programmes when there was industrial action at Granada. I’ve added them to TV Brain, so you can get the details from there when you want them.” So, appenasmaybe[iii], I did… and that’s another job signed off after 35 years…

But getting all the data – and there’s a lot of it to get these days – can never quite live up to the sheer delight of being able to see the programmes once you know they still exist; to laugh at the jokes, to be chilled by the dramas, to look at some of society’s frighteningly recent attitudes and be that little bit happier that maybe we’ve moved on a modicum. And it’s so easy now. Back in the 1980s, the word would go round that the 16mm copy of Nigel Kneale’s The Year of the Sex Olympics (1968) was being run along with an Adam Adamant Lives! (1966-1967) and an episode of The Ωmega Factor (1979) in the basement of the BFI in Stephen Street and that if you could make your way from the Frozen North down to London with £5 then you were in… although there was no tea and biscuits. Strange to think that all said items now sit encoded on shiny discs on shelves a few feet away from my desk. Aren’t we lucky these days? 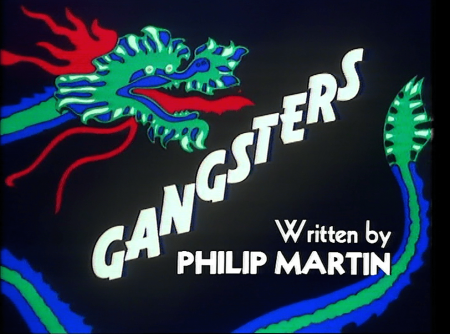 Fig. 3: And if you can do Bird of Prey, can you do the score for this as well please?

Of course, for the items that still aren’t available on DVD or streaming platforms, there’s always the old-fashioned conventions. Only while in the 1980s we were desperate for Time Lord escapades from yesteryear, now it’s more your continuity fragments, forgotten plays, quiz shows too humble, obscure or profitable to warrant a commercial release. Professor Jonathan Bignell got a kick out of Kaleidoscope’s recent colour TV event in Birmingham in the same way that I’ll never forget watching the final episode of Gangsters (1976-1978) at Fan Aid North or Ace of Wands at Past Visions of the Future.

It’s great having access to so much material at these events. Just as exciting as conferences. Just as many people to talk to. And if the RNLI are there raising funds, there’s also some very nice cake in lieu of tea and biscuits. 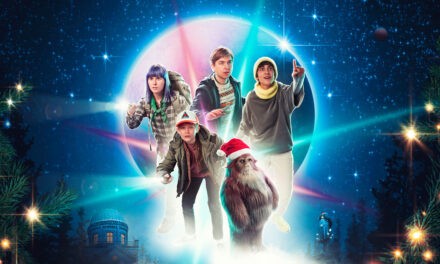 TRYING TO MAKE NATURAL SCIENCES EXCITING THROUGH TELEVISION FICTION: THE CASE OF CHRISTMAS OF THE COMETS by Katrine Bouschinger Christensen and Eva Novrup Redvall

ROADS NOT TAKEN by Richard Hewett 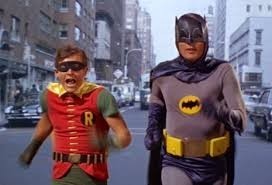 FIDELETY MATTERS: NEVER JUDGE A BOOK BY ITS TV SERIES by William Proctor