THE HANDMAID’S TALE AND THE CAMPAIGN FOR THE FEMININE WOMAN: (TV’S) ALTERNATIVE HISTORIES by Anita Biressi

I am writing this blog during Season Two of Hulu’s TV production of The Handmaid’s Tale; a drama about state-sanctioned oppression of sexual and gender non-conformity set in the  fictional Republic of Gilead.   It’s tough viewing; its promises of hope, freedom and redemption always deferred to the next episode via cliff-hangers, misdirection and plot twists.

Margaret Attwood, the author of the 1985 dystopian novel which inspired the series, has often been questioned about its mimetic, near-future or prophetic qualities. When asked, in a recent New York Times interview, whether The Handmaid’s Tale is a prediction of our social future, the author replied: ‘No, it isn’t a prediction, because predicting the future isn’t really possible…… Let’s say it’s an anti-prediction: If this future can be described in detail, maybe it won’t happen’ (in Atwood 2017). Her reply prompted me to think about the trajectories of history and how we can trace these in our own TV histories. It seemed to me that there is evidence in our own TV past of the future we might have had and the one which might still come to pass.

Their future, not ours

It’s comforting to regard The Handmaid’s Tale as an extrapolation of ‘abroad’, of ‘over there’ rather than of ‘over here’ when watching it the British context. Surely, we might say to ourselves, it reflects fundamentalist practices in the Arab world or it’s a prediction, perhaps, of what might happen in North America (the story’s setting). British reviewers, pundits and viewers have commented on the drama’s unsparing depiction of the abuses of women with reference to middle eastern theocracies or to its obvious (albeit unplanned) dialogue with Trump’s America. Trump’s America itself is lazily referenced by British reviewers as cauldron of boiling conservatism; fuelled by guns, god-botherers and conservative moms. The Times Scotland editorial noted: ‘It’s 30 years since I read the novel but this drama feels like it was written yesterday, with its echoes of Boko Haram’s rapacious brutality and the cynical pieties of the American religious right’ (Farquharson 2017). The second series, now on British screens, focuses on heroine’s Offred’s/June’s desperate refugee flight from slavery to freedom; prompting more references to the USA with reviewers noting the recent deaths of Mexicans crossing the borderlands. 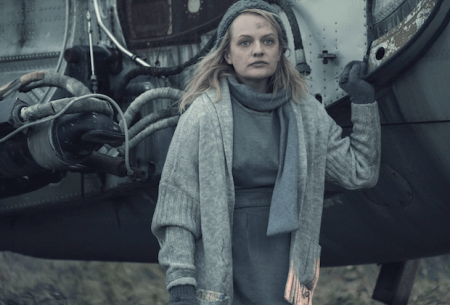 The closest British commentators have come to linking the drama with their own culture has been through a couple of passing references to the restrictive abortion laws of Northern Ireland. One explanation for this lack of immediate resonance, for British viewers, might lie in the grand guignol violence of gender/state terror played out in the series. The drama showcases domestic cruelty, medical violation and militaristic torture in ingenious variation. Its relentless punishment of feisty independent women outdoes every other ‘quality’ TV drama and that’s surely saying something. Its theatre of horror invites us to consider the brutalist, shameless and abusive logic of totalitarian power – the notorious boot stamping on the human face for ever. And once we have considered it, we may well put it aside as truly horrible, yes, but fortunately, for us British at least, ‘it couldn’t happen here.’

It was only during those moments when the drama chronicled the lead-up to the totalitarian coup and the establishment of Gilead that my own feeling of British immunity and privilege began to crumble. Narrative flashbacks revealed Offred’s/June’s experience of everyday sexism and the slow erosion of her rights. In one scene, June requires her husband’s authorisation to access birth control. In another, she is interrogated by a hospital social worker after she allegedly sent her sick son to school so that she could work. Fans have not uploaded these low-key moments to Youtube – perhaps they really are unremarkable. Yet these perfectly wrought scenes highlighted the quietly implemented, sneaky, incremental pressures on women to conform and the difficulty of resisting without being judged ‘unreasonable.’ It was these scenes which uncannily returned me to the mid 1980s and to the pressures on women to ignore the siren calls of feminism and equality in favour of home and hearth. It was these scenes which reminded me of the alternative historical route we might have followed . The evidence for this might be found, if we look hard enough, in TV and news archives.

The Campaign for the Feminine Woman

The Handmaids Tale was published in 1985 – at the peak of the Thatcher/Reagan years – and in the very same year that the British Campaign for the Feminine Woman (CFW, launched 1978) judiciously changed its name to Concern for Family and Womanhood. Its logo featured a silhouette of a man with his woman following submissively behind. It kept the Campaign for Feminine Womanhood as its strap-line . The organisation’s journal was called Vive la Différence. I remember looking at the leaflet and the logo and not knowing what to make of it. I remember feeling unsettled and bemused. Was the CFW a crank pressure group or a force to be reckoned with? I had no idea. 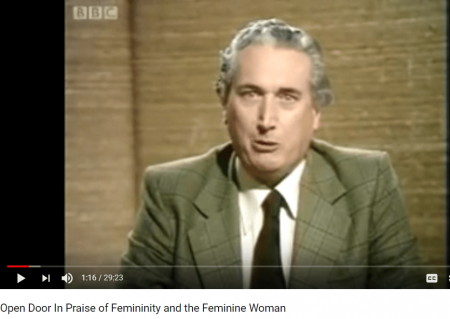 The group, led by David Stayt, argued that feminism was a dangerous social perversion, a ‘cancer’ and contrary to the biological and historical truth that women should defer to men. Stayt disclosed that ‘a woman needs and wants to be dominated by a man’ (McAslan 1992: 48). In his article ‘Taming a Feminist’, Stayt described a film which illustrated the CFW’s views. An assertive woman is beaten by a fighter pilot played by Richard Burton. Stayt writes: ‘After a final smack she looks up to him in admiration and says: “You are what a man should be .. I am nothing compared to you.” So at last the once ardent feminist .. has discovered the wonder of being a feminine woman and sees the man as rightly her master’ (in Neate 1988). While CFW favoured equal pay for equal work this was purely theoretical – after all, women’s biology made them unsuitable for so many jobs from police officers to chief executives. Nursing and nursery work seemed to be the only proper options. The campaign’s biological argument was also rooted in Biblical scripture which placed the traditional family at the heart of social good.

The Campaign chimed with the radical conservative politics of the era which championed unalloyed ‘family values’ and the ‘Victorian values’ of simpler times. 1982 saw the founding of the Family Policy Group which laid responsibility for social progress entirely within the family unit. In the same year, Margaret Thatcher’s advisor Ferdinand Mount published The Subversive Family which was subtitled An Alternative History of Love and Marriage. In Mount’s version of history, the ‘timeless’ nuclear family continued across the centuries to defy hierarchies, churches and ideologies. Mount claimed to speak for the ‘ordinary man’ and the ‘ordinary family’ which needed to resist the wrong-headed critiques of feminists, anarchists, hippies and utopians (Nunn 2002:110-1).

The CFW argument intersected nicely with this broader political rhetoric. Its key arguments come across well in the BBC Open Door public access programme entitled In Praise of Femininity and the Feminine Woman (1978 29 mins, 41 secs) which is available on Youtube.


The show featured Stayt, his wife, his daughter and other female supporters such as Helen Whiting (below). 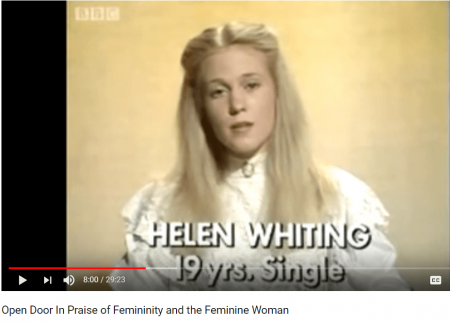 The highpoint, perhaps, of the Open Door production is the almost parodic feature ‘A doctor explains’ in which a GP presents the biological case for women’s adherence to their ‘natural sex roles’ (using the illustration below). 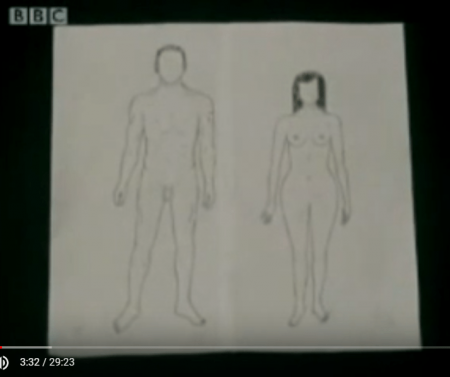 It may be surprising to learn the extent to which Concern for Family and Womanhood made solid inroads into the media. By 1988 its leading members had ‘received coverage of their views in 26 newspaper and magazine articles (often long features and interviews), 13 radio programmes and seven television programmes. They turned down a further five invitations to appear on television’ (Neate 1988). Polly Neate, writing in the Guardian, asked ‘How can the influence of such a tiny organisation be measured? Sheer hard work has produced a surprisingly high media profile… Compare the Campaign for Nuclear Disarmament, another pressure group [whose] conference brochure states that “it becomes increasingly difficult to get the press to take an interest in our activities”’.

Stayt’s fringe status seemed to place in him high demand. By all accounts he was articulate, approachable and intelligent. It is perhaps the banality, affability and downright ordinariness of the middle- England extremist which affords him such unfettered access to the public realm. In this regard, Stayt resembles some of our minor and very vocal extremist politicians today; who do not seem to struggle to find a platform for their views. And it’s worth noting how easily and quickly these figures can re-route the rails of social progress. The Campaign for the Feminine Woman is a reminder that in parallel version of history Britain might have been another Gilead.

McAslan, I. (1992) ‘Pornography or misogyny : fear and the absurd’ in D. Currie and V. Raoul (eds.) Anatomy of Gender: Women’s Struggle for the Body. Canada: Carleton University Press :37-52.

Neate, P. (1988) ‘Entertaining Mr Stayt – The Campaign for the Feminine Woman is a publicist’s dream, the tabloids love it.’ The Guardian 13 December.

[i] All webgrabs are from the Open Door Broadcast at https://www.youtube.com/watch?v=X3_Z7v9puAo

Anita Biressi is Professor of Media and Society in the Department of Media, Culture and Language at the University of Roehampton. She is Convenor of the MA Media, Communication and Culture.

BURNING THE DRESS: THE AMBIVALENCE OF OUTLANDER’S PERIOD COSTUMES by Josette Wolthuis 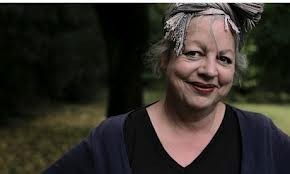