Somewhat tentatively , I set off for the gigantic 2016 Society for Cinema and Media Studies (SCMS) conference in Atlanta in early April.  It was my first SCMS and the prospect of five full-on days and more than 1900 presentations promised to be either heaven or hell (I had already expressed some misgivings in an earlier cstonline contribution in February 2016).

My presentation ‘We’re going to be sent to Hollywood: Shirley Temple ‘Double’ Competitions in 1930s New Zealand’ was placed in the first session (Wednesday morning) sand then I was free to roam across the great vista of scholarly presentations. Unlike most academic conferences which include keynote addresses or plenary sessions, where all and sundry sit in reverential silence listening to the great and good, there no such break-outs at SCMS. There was a love-fest for renowned British film/cultural critic Richard Dyer, when a battalion of colleagues (including B. Ruby Rich and Jackie Stacey) provided tributes to the man and his work, only for the occasion to be delated a little when Dyer was called to the stage and seemed to be a bit bewildered by all the fuss.

This non-hierarchical structure is a unique feature of SCMS. It makes it possible to encounter interesting people in all kinds of places; familiar names and authors admired or detested. The UK film critic Mark Kermode was there and declared in in a tweet, ‘Have to say that being at #SCMS16 makes me feel humbled and encouraged by the vibrant state of film academia’.

The Respondent to a session on ‘Rethinking Transcendental Style: New Approaches to Spirituality and Cinematic Form’ was director/screenwriter Paul Schrader (Taxi Driver, Raging Bull). My Significant Encounter was with influential film critic/historian Leonard Maltin and I grasped the opportunity to test him about his knowledge of New Zealand film; the films he had seen but also the films he should see.

Nevertheless, the lack of tea breaks and usual huddle over lunch-time conference fare made it difficult to meet very many people. There was another sort of hierarchy, with a core of regular SCMS conference-goers, circled around by strays and flocks of newbies hoping to be noticed.

The best moments were in the presentation sessions and the discussions they generated and best session, for me, was a Saturday morning slot addressing ‘Banality in/and the Everyday Media Landscape’, featuring Jocelyn Szczepaniak-Gillece (University of Wisconsin-Milwaukee) on hallucinogens, R.D Laing and film; Stephen Groening on the 24-hour video of Pharrell’s ‘Happy’, and Dan Hassoun and James Gilmore (Indiana University) on ‘slow media’.   This session was fizzing with ideas and quite delightful. I was also pleased to make contact with the Transnational Cinemas Scholarly Interest Group (SIG), organised by British academics Austin Fisher (Bournemouth) and Iain Smith (Roehampton).

There was a proliferation of fan studies; some good and some rather pointless.  In an unexpected coincidence on the final two days, conference goers came face-to-face with fandom as there was an Atlanta Weekend Camp for Furries taking place at the nearby Westin Hotel, and some of these  ’creatures’ strayed across the sky-bridge to the Hilton.

There was little discussion of The Walking Dead, even though the show is shot in Atlanta and its environs.  But there were moments of recognition for me, gazing out of windows at silent basketball courts or walking deserted daytime streets. A system of sky-walks linking the blocks of the CBD enable the warm-bodied to avoid contact with the cold-bodied, homeless on the street.  But fleeing from other dangers was a favourite topic, as in one conversation over-heard between two North American academics, ‘President Trump! I now live in Michigan and the Canadian border is only two hours away!’.

SCMS 2017 will be held in Chicago, a more interesting city than Atlanta. This might be enough for me to give it one more go.

WHITHER THE TITLE SEQUENCE? EXPOSITION, REDUNDANCY AND OPENING CREDITS by Richard Hewett 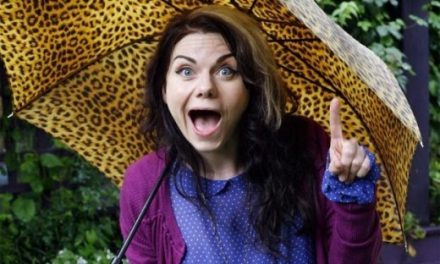 WILL WOMEN EVER HAVE THE LAST LAUGH? TRACEY ULLMAN VERSUS VIOLENT CRIME by Elke Weissmann