I first saw Melancholia (von Trier, 2011) on my TV during the day while home alone. A few weeks later I saw it again at the cinema with friends.  It’s a film about two sisters Justine (Kirsten Dunst) a chronic depressive, and Claire (Charlotte Gainsbourg) a rich bourgeois housewife, and their experience of the end of the world. The telly is a conventional widescreen and after watching the film on it I wondered if it might be better to see the movie again on the big screen with ‘big’ sound.  Even in the domestic setting of my living room the aural impact of the film’s final scenes where a large planet (‘Melancholia’) collides with the earth seemed impressively overwhelming. But on the second viewing – in a good sized cinema during a Film Festival – I was thoroughly underwhelmed.  This was puzzling. Like most people I assume that feature films are, generally speaking, best seen on the cinema screen. Melancholia tries hard to show us imagery that is resonant, strange and affecting, so why this was not amplified or felt more deeply second time around?  Was it because I was just too familiar with the film and its aesthetic and narrative patterns? Or that the sensual impact of its spectacles, vistas and performances were not decisively changed or enhanced by the fact of a big screen/big sound experience?  Perhaps the domestic space in which I first encountered it enhanced the film’s depressive, melancholy moods which were absorbed into the spaces of my home, infiltrating them so that it reached out and lingered long after the final credits. After all, this is a film in which the central character’s craving for self-annihilation and apocalypse gets projected outwards and infects the cosmos: little wonder it rubs off in the place of home viewing but seemed diluted among the crowded cinema audience.

But these are merely speculative impressions. One thing what the experience brought home to me was how inert and vacant all those old film vs. television distinctions now seem. There are no longer decisive differences between the two to do with quality of the image, or availability of spectacle or visual or aural depth or, given the prominence of large screen broadcast of sport and theatre and music, between live transmission and recorded film. The differences also seem less because they can be contrasted with new forms of media which cultivate out attention in apparently new and distinct ways. Equally, the experience reminded me that I don’t really have a screen preference. Like a lot of middle-aged screen scholars a vast amount of my viewing of movies has taken place on a television screen, not least watching the massive amount of feature films screened on British television during the 1960 onwards, as well as through the consumption of heaps of recorded movies and television on VHS and DVD. More recently I’ve been watching downloaded television and films on laptops and handhelds – episodic television being particularly convenient during the fifty minute train journey I take to work and back every day.

I think I can explain my reaction to the two viewings of Melancholia in a different way. It was less about the technology of consumption than my attitude toward each moment of reception. The first viewing took place during a quiet period at home in the middle of the day, and I was able to bring my full wide-awake concentration and attention to it, in a place and on a TV screen I use frequently for study, compared to a late-in-the-day cinema experience among friends who were new to it and thus differently positioned as spectators.  And these days I am used to concentrating hard on the television screen. Sustained concentration, the ability to direct and marshall one’s undistracted attention is a quality that contemporary television seems to reward, in both its fiction and non-fiction programming. This is in contrast to the way television was seen by many in the past, when the smaller size of the television screen was always emblematic of other ranges of inferiority. This did not negate a perception that television was an overwhelmingly powerful corrupting force in the home, corralling and overwhelming the attention of its viewers in pathological and socially toxic ways.

According to Jerzy Kosinski one of the paradoxical ways in which television exerted its grip was as a medium whose overall power transcended particular programmes and moments as well as the distractions of the domestic setting:

While viewing, you can eat, you can recline, you can walk around the set, you can even change channels, but you won’t lose contact with the medium. Unlike theatre or cinema, TV allows, even encourages, all these “human” diversions. TV’s hold on you is so strong, it is not easily threatened or severed by the “other life” you lead. While watching, you are not reminded (as you would be by a theatre audience, for instance) that you are a member of society whose thoughts and reactions may be valuable. You are isolated and given no time to reflect. The images rush on and you cannot stop them or slow them down or turn them back.  (‘A Nation of Videots, 337)

A version of Kosinski’s ‘videot’ thesis is elaborated in his novella Being There where the central character Chance (played by Peter Sellers in the 1979 Hal Ashby film) has ‘no meaningful existence outside of what he experiences on television’.  Of course, today we do have the means to ‘stop’ or ‘slow’ television, and a lot of the finest work  – I’m thinking for example of the dramas I have written about in previous blogs  – demand reflection and depend on the acknowledgment of their viewer’s social, moral and ethical thoughts and reactions.

Toward the end of Melancholia, an increasingly panicked Claire opens her laptop and searches the internet for information about whether the planet Melancholia will collide with ours. It is an amazing moment in a film that has hygienically erased all traces of the media from its world (despite the fact that its central character has a career in the advertising industry). Perhaps it reminds the viewer how fully immersed many of us are in the immediacy and self-absorption of the web, particularly its social media. Indeed it seems to me that it is social media that has taken on many of the characteristics that Kosinski attributes to television, particularly the power over our forms of concentration, and its encouragement of diversion.  Instead of depicting a medium that cultivates a narcissistic, self-absorbed engagement with the moods and (dis)connectivity of the self, Melancholia offers the character of Justine who embodies these qualities instead.

Television by contrast seems more and more to reward our concentration rather than corrupting it.  But one of the problems with viewing it on hybrid devices like laptops, phones and tablets is that their connectedness tends to encourage proximity to the fleeting slices of immediacy that Facebook, Twitter, email etc offer. No doubt it is partially true to some extent that television helped socialise us in the forms of attention that social media now encourages as well. But if what you want to do is appreciate the achievement of the television that you admire, the best way to watch television  (especially long form episodic television drama), is continuously –  one after the after –  and without the distraction and interruption of the new videot media.

Jason Jacobs is Reader in Cultural History in the School of English, Media Studies and Art History, University of Queensland. He is author of The Intimate Screen and Body Trauma TV. He is currently working on an Australian Research Council funded project called ‘Worldwide: the history of the commercial arm of the BBC’. His BFI TV Classic on on Deadwood will be out in May. He is writing a book on David Milch for the Manchester University Press Television Series and is co-editor with Steven Peacock of the forthcoming collection Global Television: Aesthetics and Style (Continuum). 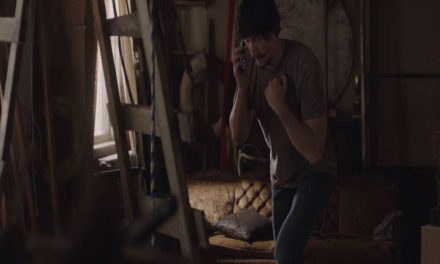 WHAT ACTORS DO: ADAM DRIVER IN GIRLS by Gary Cassidy and Simone Knox

THE SINGING DETECTIVE: YOURS FOR £5,000 by John Ellis