At a time when a growing number of older persons in the United States are living with their adult children (between 2000 and 2011, this figure rose from 2.2 million to 4.6 million[1]), the U.S. broadcast networks Fox and CBS have each launched a new situation comedy about retired parents invading their children’s homes. With the start of the 2013-2014 television season, CBS introduced the multigenerational multi-camera sitcom The Millers. Created by Greg Garcia, who also developed the comedies My Name is Earl (NBC, 2005-2009) and Raising Hope (Fox, 2010), the show revolves around Nathan Miller (Will Arnett), a local television reporter in his early forties, whose revelation that he recently got divorced inspires his father to do the same: upon learning the news Tom Miller (Beau Bridges) leaves Carol (Margo Martindale), his wife of 43 years, on the spot, explaining that he had wanted to get a divorce for decades, but Carol had always insisted that this would set a bad example for their children. Since this argument is void now that their son divorced his wife after only three years of marriage, Tom emphatically announces: ‘If he gets to be single, so do I!’ As a result of the sudden separation, Carol moves in with Nathan, while her soon-to-be-ex-husband goes to live with their daughter, Debbie (Jayma Mays), who is married and has a young daughter.

Fox’s version of the intergenerational household comedy is called Dads, the network’s first multi-camera sitcom in years. The show follows the lives of Eli Sachs (Seth Green) and Warner Whittemore (Giovanni Ribisi), two childhood friends in their mid-thirties who run their own video game company. Warner’s father Crawford (Martin Mull) is a wannabe businessman forever failing in his naive attempts to finally find the key to success. Crawford not only lives with his son, his daughter-in-law Camila (Vanessa Lachey) and their two children, but he also frequently meddles in Warner’s professional life, thus producing all sorts of unwelcome surprises. Eli and his father David (Peter Riegert), on the other hand, never had a close relationship because David left his wife and son when Eli was a child. Despite their estrangement, Eli agrees to let his father move in with him after finding out that he lost his home. The show’s central premise thus resembles that of The Millers: in both sitcoms two retired single parents move in with a grown-up child, one of whom is also single while the other one has a family.

Dads: Warner and his father Crawford (1:3)

However, while The Millers is a conventional family sitcom in terms of its humour and overall tone, Dads is written and produced by Alec Sulkin and Wellesly Wild, both writers and producers for Fox’s animated comedy series Family Guy (1999-2003 and 2005-), and co-executive produced by Seth MacFarlane, creator of Family Guy as well as of the animated Fox comedies American Dad (2005-) and The Cleveland Show (2009-2013). The frequently crude and politically incorrect humour of Family Guy, equally hailed and hated by different sections of the audience, is also evident in Dads. Even before the show’s premiere on Fox in September 2013, the press previews of the pilot episode led to a storm of outrage over several scenes and comments that were widely perceived as racist: at the beginning of the episode, Eli and Warner’s Asian-American assistant Veronica (Brenda Song) tells them: ‘You’re lucky your dads are American. My dad beat me with a math book till I was sixteen’. In order to win over a group of Chinese investors, Eli and Warner insist that Veronica ‘dress up like a sexy Asian schoolgirl’ which results in the investors’ Chinese translator sending her a picture of what she describes as ‘his tiny penis’. Warner’s father Crawford not only refers to Asians as ‘Orientals’ (a term perceived as racist in the United States), but he also warns his son that ‘the Chinese are a lovely and honourable people, but you can’t trust them’. The Media Action Network for Asian Americans reacted by asking Fox to reshoot several scenes of the Dads pilot, but the network declined. Yet, what most critics have failed to take into account is the show’s deliberate and self-conscious play with racial stereotypes, as the following dialogue illustrates (‘Dad abuse’, 1:10):

Eli to Veronica: Can you recommend a good Thai restaurant?

Veronica: And you’re asking me?

Eli: Because you have a cousin named Wai Mi.

Veronica: Warner, Eli is being racist!

Veronica: But I don’t eat Thai. Everything tastes like spicy pets.

Veronica: You’re not racist if you’re making fun of your own race.

Eli: Hey, let’s leave what’s being racist up to the white media, ok?

Clearly, Eli’s last comment is implicitly directed at the criticism Dads has faced in the US media. In fact, upon closer inspection, the show’s representations of race and gender can even be considered more progressive than those presented in most other sitcoms. First of all, the frequency and absurdity of racial jokes in Dads is a clear indication of their function as parody. Second, by explicitly discussing these comments in terms of their potential racism, as in the above scene, the show introduces a meta-discourse which potentially enables the viewer to reflect on racial categories and racist concepts. Most importantly, however, the construction of the sitcom’s main characters subverts traditional racist and sexist stereotypes. The character constellation is in itself unusual: while the show’s four protagonists are all white males,[2] the female regular characters are all non-white (by U.S. standards): Veronica, Eli’s middle-aged Mexican maid, Edna (Tonita Castro), and Warner’s wife Camila, also a Latina. However, as opposed to Edna, who is constructed as the stereotypical illegal immigrant, complete with flawed English and frequent swearing in Spanish, Camila is evidently a second- or third-generation Latina whose ethnicity is only hinted at in the show and not even mentioned on Fox’s official Dads website. The inclusion of a Latina character whose Latinidad is only a minor aspect of her characterisation can be considered a step towards further inclusion of non-white characters without singling them out as the Latino/Asian/African-American character (the opposite is far more common, especially in sitcoms, as for example in the case of the sexy Colombian ‘spitfire’, Gloria (Sofia Vergara), in ABC’s Modern Family (2009-)). Even though the two Latina characters are largely confined to the domestic space, Edna as Eli’s housekeeper and Camila as a housewife, they are both portrayed as self-determined women who are stronger (both physically and emotionally), braver and more reasonable than the white men in their lives. The narrative makes it clear that both Eli and Warner would be lost without the support and supervision of Edna and Camila.

Veronica fulfils a similar role in Eli and Warner’s professional life, because the two men are too unorganised to successfully lead a business. Promoting herself to vice president of game development in the pilot episode (as a compensation for her Asian schoolgirl performance), Veronica brings structure and discipline to the work process and, unlike her bosses, is able to face every problem head-on.

By contrast, the white male protagonists in Dads are all deficient in different ways. Warner is a neurotic weakling lacking testosterone (as the episode ‘Mister Edna’, 1:12, reveals). Eli is portrayed as emotionally immature, his chief interests being sex, drugs and video games. Eli’s father, David, is a cranky, lazy pessimist who has always avoided responsibility and who spends his days watching television, whereas Warner’s father, Crawford, is an unshakable optimist, but he is also a failed businessman and an alcoholic with old-fashioned racist views. By offering strong non-white female characters as counterparts to the show’s flawed white male protagonists, Dads challenges traditional notions of white male superiority while entering new territory in televisual representations of race.

The Millers, on the other hand, uses a well-established racial constellation by adding one black male character to an otherwise white cast: Nathan’s camera man and best friend Ray (J.B. Smoove) is the only non-white regular character on The Millers. Ray’s characterisation is all cliché: he speaks with a strong black accent, comes from a poor background (while playing Jenga with Nathan, Ray says: ‘I have an unfair advantage over you since I grew up in a house that was falling apart’; ‘Dear Diary’, 1:11) and is portrayed as a womaniser eager to recruit his newly divorced friend as his ‘wingman’.

The Millers: Nathan and his friend Ray (1:2)

Variations of the black male sidekick to a white male protagonist have populated American sitcoms for many years (e.g., Doug Heffernan’s best friend and co-worker Deacon in The King of Queens (CBS, 1998-2007); Eddie Stark’s friend Kenny (also played by J.B. Smoove) in ‘Til Death (Fox, 2006-2010); Mike Biggs’s best friend and co-worker Carl in Mike & Molly (CBS, 2010-)). So, unlike Dads, The Millersis highly conventional in terms of its racial representations. Yet, at the same time, the two sitcoms share one important aspect that media reviews have addressed only in passing: much of the comedy in both shows is based on ageism. While ageist depictions of older people are no new phenomenon in American sitcoms, the centrality of this theme in Dads and The Millers is unusual. Part II of this blog will take a closer look at how the protagonists’ parents are portrayed in these two programmes.

Jamila Baluch is a PhD student in the Department of Film, Theatre and Television at the University of Reading.  Her research is on representations of race in contemporary U.S. drama series. 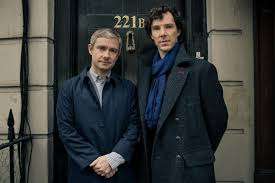 A Study in Sherlock: Considering Season 4 by Frances Smith