One of the great pleasures and challenges of conference organisation is putting interesting and complimentary panels together from the abstracts you receive. Planning that you put into this always pays off in the end, looking at each proposal from several different perspectives, working out the different ways that it could fit in with other papers. If you do this well, a conference can reflect something of your own idiosyncrasies and personal understanding of your field.

Putting together the programme for last month’s ‘Television Drama” The Forgotten, the Lost and the Neglected’ Conference at Royal Holloway, there was one panel that I was particularly pleased to have assembled. Receiving submissions from Mary Irwin (Northumbria) on No – Honestly (ITV/LWT 1974-5, a comparatively classy romcom-sitcom star vehicle for John Alderton and Pauline Collins, Ben Lamb (UEA) on New Scotland Yard (ITV/LWT 1972-4, a studio police series full of unexpected depths and surprises) and Sally Shaw (Portsmouth) on Gloo Joo (ITV/LWT 1979, a one-off adaptation of a hit Michael Hastings’ West End farce about immigration and deportation – made by the Comedy, not Drama, Department and open to problematic reading) meant that I could put together a ‘London Weekend Television in the 1970s’ panel.

As a historian of ITV drama between the 60s and the 80s, I have come to find that for me personally the best way to get a handle on this material, (the type of work that made and the circumstances under which it was produced) is through consideration of the individual ITV companies that formed the network. I think that the closest point of historical comparison is with the situation of the great studios in classical Hollywood. There was even a ‘Big Five’ in both cultures – for MGM, Paramount, RKO, Warner Brothers and 20th Century Fox read ATV (later Central), Granada, LWT, Thames and Yorkshire – orbited by a number of smaller studios that made significant contributions to the culture (instead of Columbia and Universal, ITV had Anglia, HTV, et al).

Each of the component ITV companies had its own house style. Identifying these styles is half of my work as historian. You can start with fairly broad generalisations based on memory and perception (for example, in drama Lew Grade’s ATV concentrated on making high budget international star vehicles in the hope of export, the high-minded Granada had a stronger track record in serials than series, etc). You can then test these assumptions through work on filmographies, identifying patterns of production and going on to detailed textual analysis of the programmes themselves, picking up on recurring themes, concerns, techniques, etc. that tend to concentrate in each company’s body of work.

Finding out possible reasons why each of the companies took these distinctive paths is the second half. Much of this is down to personnel. Richard Marson’s superb new biography of Verity Lambert gives a good example of this in operation at Thames Television in the 1970s, with the appointment of the forward-thinking Jeremy Isaacs as Controller resulting in his appointing Lambert as Head of Drama, Lambert in turn employing her friend Andrew Brown as one of her favoured producers, the combination of individuals resulting in programmes that bore a distinct stamp unique to Thames, such as Rock Follies (1976-7) or Edward & Mrs Simpson (1978). House styles of each company were also a cumulative process of lessons learned from previous successes and failures – for example, a series such as Disraeli (1978) is clearly a continuation of the Edward the Seventh (1975) phenomenon at ATV, while the traumatic experience of producing a flop series meant that a company would never attempt a similar project again (e.g. Napoleon in Love, 1974, at Thames).

Research into the resources and budgets that studios had available helps to build up understanding of the various ITV house styles. For example Thames’ groundbreaking film unit, Euston Films, was a much more viable experiment to launch in London, where years of experienced personnel from the British Cinema industry could be recruited, than in other parts of the country. Having set up this division, there was a need for a constant level of production to be maintained each year. The decision to re-launch the studio Dutch detective series Van Der Valk (1972-3) as a glossy film series in 1977 seems to be a bafflingly bad one, until you looks at the chronology of Euston Films production and realise that they needed to produce one popular series per year, and that The Sweeney (1975-8) couldn’t manage another production block until 1978 and that Special Branch (1969-74) had run its course. With a gap in production needing to be filled, Euston turned to resurrecting a recent Thames hit for filmed treatment.

Although I’m primarily a historian of TV drama my understanding of the various ITV companies is always enhanced by looking into what all of the departments of each company (light entertainment, documentary, children’s, etc.) were doing simultaneously, with each company’s institutional standing a synthesis of everything that went on within it. Hanging over everything was the threat of a company losing its franchise to broadcast on ITV for its region, which could alter programming as the date of decision drew nearer, with existing franchise-holders needed to demonstrate the value and profitability of their broadcasting.

It’s always instructive to work out where and what in your own past might be the source of a particular research interest. I think that my fascination with ITV cultures stems from having grown up in London in the 1980s, the only part of the country after 1968 to have housed two ITV companies, with Thames broadcasting from Monday to Friday afternoon, and LWT then taking over after the children’s programmes until Sunday’s closedown.

The sister companies had very different personalities. Thames always felt more steady and established, like a high-street bank. Parts of its programming didn’t seem to change very much over the 1980s, with Minder (1979-94) and Rumpole of the Bailey    (1978-92) as its drama flagships, an endless succession of series of Hywel Bennett as Shelley (1979-92) and regrettable Jim Davidson star vehicles in comedy (not to mention Benny Hill doing the same joke in every one of his shows for twenty years), with the hard-hitting This Week/ TV Eye (1956-92) acting as current affairs conscience of the company. Thames’ studios were at the out-of the way North London Suburb of Teddington. The only time that I ever visited there, to see the first edition of Clive Anderson Talks Back (not a Thames production) being recorded at the studios in 1988, it was as I expected it to be, with photographs of Benny Hill in pride of place in a location where a teenager would feel out of place.

LWT felt like an altogether brasher proposition, its public perception being built around highly visible stars, personalities on big-money contracts that meant that they might front more than one show (a historical legacy of the company created by David Frost) – Cilla Black in Blind Date (1985-2003) and Surprise Surprise (1984-2001), Bruce Forsyth in Play Your Cards Right (1980-2003) and You Bet! (1988-90), Jeremy Beadle in Beadle’s About (1986-96), Michael Barrymore’s Barrymore (1991-2000), etc. All these programmes were generally appalling, but also utterly inescapable. Everything else that LWT did rather laboured in the shadow of the prevailing star culture, but there were other things buried away in the schedule – Brian Walden’s interviews with politicians on Sunday middays in Weekend World (1972-88) and the eclectic and prodigious South Bank Show arts documentary strand (1978-2010) at 10.30 on Sunday nights (probably the most useful contribution to cultural posterity left to us by the LWT of the 1980s and 1990s). The company had a much more central physical presence in London, with the LWT Tower on the Southbank, built to house the station.

Although commercial media stations as Thames and LWT feel monolithic and eternal when they are going concerns and you’re too young to remember a time before they existed, they are but really dust and shadow, temples built on sand. Thames famously lost its license in 1992, arguably because of the transmission of ‘Death on the Rock’ a 1988 This Week investigation into Government involvement in the SAS assassination of three IRA members in Gibraltar. It was replaced by Carlton Television, now remembered for two things; its idents, unconvincing attempts to build a sense of audience identification by having groups of ordinary Londoners like firemen and tea ladies telling the viewer “You’re watching Carlton!” – and employing a young David Cameron as Director of Corporate Affairs. It’s much harder to remember any actual programmes made by Carlton. Along with other ITV regions, LWT lost its on-air identification in 2002, one of those things that you don’t notice having gone until a while after they happened, but you still miss a bit.

The most evocative memories that I have of what it felt like to live in a city with two ITVs are of the Friday handover from Thames to “our friends at” LWT, with its sense of formal acknowledgement of the week being over (and not having to face school until Monday).

This ‘loosening-of-tie’ effect was then reiterated by the first original LWT programme of the weekend, The Six O’Clock Show (1982-8). A typically low-quality quirky local news themed chat show, and vehicle for another of LWT’s contracted stars, Michael Aspel, the major virtue of the programme for me was its various opening credits, animations always themed around the appealing theme of Londoners leaving work and becoming free and relaxed (and less plausibly, hurrying home to watch the Six O’Clock Show).

The alternation of Thames and LWT reflected and augmented the rhythm of the Londoner’s week, and this delineation of place and time through broadcasting left generations of viewers with a sense of two distinctive identities held within the one ITV channel. 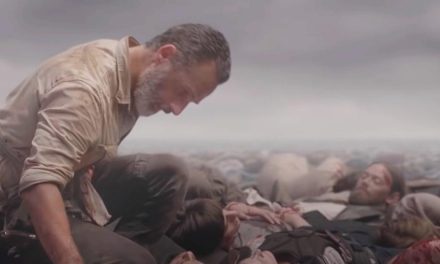 DEATH BY FRANCHISE: GOODBYE RICK GRIMES, IT’S BEEN EMOTIONAL: THE SURVIVAL AND EXPANSION OF AMC’S THE WALKING DEAD (2010 – ) by Stella Gaynor