Two years ago, CST kindly posted my piece on Christmas television and ‘BBC Christmas Specials’. The blog focused particularly on those programmes here in Britain (but also shown around the world) that had inveigled themselves into being part of the Christmas ritual, and become ‘event’ television for the festive period, and for the BBC in the process. These programmes were of course Doctor Who and Sherlock (BBC).

In revisiting this contribution and subject matter (in time for Christmas), my intention is to give a wider appraisal of Christmas on television as an addendum to my first offerings on ‘Christmas Specials’. I will begin where I started last time; I wrote:

The Christmas television schedules have, for many years, introduced a sense of the Carnavalesque to the viewing experience. Broadcasters, programmes, and family favourites collude in temporarily suspending the ‘normal’ laws and rules of the diegetic and television world, providing one-off storylines, ‘specials’, and, in some cases, even subverting perceptions of seriality in acknowledgement of a collective cultural ritual. Christmas television has become so central to the Christmas experience that recently, in the words of the Bishop of Leeds, it has now become the modern-day “Midnight mass”; the focal point for family worship and togetherness (The Telegraph, 2015). (Longden, 2015).

Similar in observing a seasonal television ritual, but in a much more secular vein, Paul Noble (not a Bishop), in Television Quarterly (2007), observes that “Christmas and television were made for each other. The best and worst elements of both become even more apparent and yet even more appropriate as December twenty-fifth approaches.” Noble’s observation forms part of a review of what is still, to date, the only dedicated book form study of festive seasonal television – Diane Werts’ study of a largely American Christmas on Television (2006). As stated in my last contribution on this same subject, but with BBC Christmas specials in mind, outside of Broadcaster websites, fan blogs and vlogs, very little critical attention has been given to this particular format and phenomenon. Further, I added, “This [dearth] seems strange when you consider how over the last 10 years, the BBC’s flagship programme Doctor Who has turned the concept of the Christmas special into a cultural meme or ‘Media Event’ in its own right, and the BBC’s Sherlock looks set to do the same”.

Sadly, there is no new Sherlock to await, but the new Christmas special Doctor Who, and the impending arrival of a new and female doctor (Jodie Whittaker) to boot, still shows not only how Christmas (and the BBC) creates expectations around the television viewing experience and impacts upon certain television texts and forms, but serves to herald the promise of a new (television) season. However, this dearth of academic interest in Christmas television has since been bolstered. Since I last wrote on this subject The Journal of Popular Television has published a collection of essays for a special issue on ‘Television Seasonality’ (April 2017), exploring elements from Christmas scheduling (Tucker, Wolfenden, Sercombe), to ‘Festive Television in the Socialist World’ (Huxtable, Mihelj, Bardan, Szostak), to ‘Mad Men and the Dangers of Seasonal Nostalgia’ (Hoffman). This eclectic approach mirrors the variety and heterogeneity of the modern Christmas experience as presented through television. It is worth pointing out that although Christmas television often unites audiences in a shared cultural ritual, this ritual is expressed in many different ways and across many different cultures. This has become particularly evident in more recent years. With niche channels and programming replacing the mass network audiences of the past, dominant ideologies have to work harder. Christmas television can be Made in Chelsea (E4) or borne from The Walking Dead (AMC). What this last example proves in particular, however, is that no matter whether the (diegetic) world is undergoing war, famine, or pestilence, these events are often suspended, for one day and one episode only, in favour of spreading the Christmas message – peace, love, and good will. It is a canny move by producers and broadcasters in showing that no matter what happens, your favourite TV programme and broadcaster is still here, and that it’s prepared to enter into the Christmas spirit. These one-off episodes are interesting in that they tacitly acknowledge events happening at that moment in the real world, and therefore an audience too. They present, as Derek Johnson (2015) states, “issues about… temporality”, a dynamic that chimes with seasonal tropes of the gothic and of nostalgia. 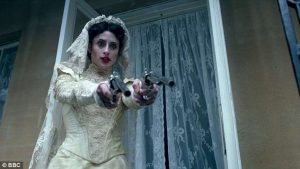 There are also some other interesting and often common narrative ways of tapping into the audience’s shared ritual. Charles Dickens’ A Christmas Carol (Scrooge) has not only been a feature of Christmas ever since its publication in 1843, especially in the form of numerous television adaptations, but its plot and themes have consistently been adopted by a host of television dramas and sit-coms as a way of demonstrating a connection with audiences. As Johnson observes in his chapter ‘Seasonality, Nostalgia, Heritage, and History’ (2015), Christmas television is particularly effective in “denaturalising…the relationship between past and present”. It is a liminal form “and its status as simultaneously a part of everyday life and removed from it, ‘allow[s] for the presentation of and engagement with ritualized narratives.” Johnson’s observations form part of an examination of another Christmas tradition that has been taken up enthusiastically by television; that of the Christmas ghost story. For Johnson, ghost stories on Christmas television are “irruptions of the abnormal”, where magic works and science doesn’t. It is a particularly gothic tradition and element, and where British TV audiences are concerned the adoption of a Victorian or Edwardian setting, “remain stock eras for British ‘heritage’ entertainment”, a heritage that has since been exported globally by the BBC. 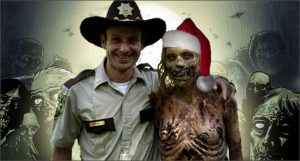 If we are to view Christmas viewing as an especially unifying experience, reinforcing collective identities, common belief-systems and ideologies, it is important to understand just what that experience describes. As I stated in my previous blog:

Programmes such as Doctor Who and Sherlock function within this Christmas experience in ways that highlight and negotiate change. They introduce chaos and potential change in order to show order and continuity being restored. (Longden, 2015).

Doctor Who especially, is particularly effective in bringing time and the temporal to the foreground, and at a time when most audiences are reflecting on the passing of one year and the ushering in of the new. Programmes such as Doctor Who and Sherlock have also become metaphors for negotiating and making sense of wider and more geopolitical concerns. 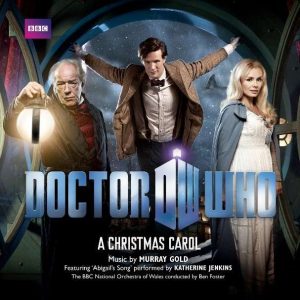 And of course, the ways in which television often reflects and constructs these changes serves to promote television as the definitive cultural forum. Christmas allows television in general, and certain broadcasters in particular, to be seen both as part of a tradition, and as safe guides to the new. As both Matt Hills (2014; 159), and Amy Holdsworth (2011; 113) point out with regard to Doctor Who in particular, although the programme has been positioned as “a matter of public value, providing the ‘social glue’ to unite a nation”, it has also been positioned to attract “a global array of fan-viewers…drawing on BBC nostalgia”. Nostalgia, as the BBC learned a long time ago, plays a big part in Christmas television, and also a big part in exporting a particularly BBC type of Christmas to the world. Christmas television, therefore, makes more visible the role of television in shaping, presenting, and prompting debates and concerns in contemporary life.

Diane Werts’ chapter, ‘Christmas with a Conscience: Time for Social Statements’ (2006), highlights in particular how the dynamic of Christmas television is often used to suggest something altogether more serious, whilst at the same time offering a comforting and reassuring message that all will be well. Becoming a distinct trend in the early 1970s, with American network TV examples such as MASH and All in the Family, Werts observes how special Christmas episodes became increasingly a vehicle to explore more serious topical issues such as race, war, and class. However, it is worth noting that even though these issues were raised in Christmas episodes, by the end of the narrative, the equilibrium and a sense of order was restored with the heart-warming glue of Christmas used to patch up problems and the fractures in society. This narrative and plot device became common to Christmas television, evident still to this day.

But as Emily Hoffman points out in her study ‘Do they Know it’s Christmastime [sic] at All?: Mad Men and the Dangers of Seasonal Nostalgia’ (2017), there are some programmes that have tried to subvert the seasonal message of harmony. Hoffman’s example of AMC’s Mad Men is interesting in these respects because she also suggests such subversion as indicative of the changes undergone by the television industry in recent years and usually described as the TVIV era. For Hoffman, Mad Men ironically defied the tradition of nostalgia in the Christmas and Thanksgiving episodes “aggressively subverting viewer expectations”. Hoffman observes how in these seasonal episodes, Mad Men often presented “situations resembling those found in traditional seasonal episodes only to lead characters to moments of distress and discord rather than contentment and reconciliation.” (2017). Whilst this is in-keeping with what Butler observes as the “despair and alienation” that lay just below the surface of that era (2013), and which the series tries to portray, Hoffman’s observations highlight an attempt by some dramas to subvert the traditional Christmas message and form.

Image 4: AMC’s Mad Men. An ‘Old Fashioned’ please. Where Xmas and nostalgia can drive you to drink

The TVIV era may just show a new development and evolution where Christmas television is concerned. My recent research into American ‘Quality TV’ led me to an episode of The Sopranos (HBO) where in a scene that depicted mob family children visiting Santa, one little boy was seen to say “Fuck you Santa”. It seems that Christmas TV has finally met with what Leverette & Ott (2009) describe as ‘Cocksucker, motherfucker, tits’ brand of programming. As such, the idea of ‘popping a cap’ in Santa’s ass, should tell us something about HBO, ‘Quality TV’, and what we as audiences expect from the same. This episode has led me to wonder if there are any forms of television not fit for the Christmas makeover.

We can view these Christmas episodes and Christmas specials as negotiating tradition and change, convention and re-inscription. Their form is more often than not profoundly self-reflexive, especially when approached through its paratexts, and its status, in some circumstances (Sherlock Mini Episode 2013), as a one-off, allows its story-world to often speak more directly to its fan-base and audiences, or to issues and current events that might normally be out of bounds. Another feature of the Christmas special is the migration of actors from outside of the story-world into the special feature. They even play with time, either as dream sequence, or as extended flash-back. And whilst tradition plays a big part, more recent examples show a desire to accommodate the veracities of global and transnational culture. 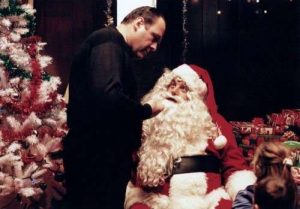 Image 5. A traditional ‘Family Christmas’ vs. ultimate subversion? “Fuck You Santa” on HBO’s The Sopranos.

Kenneth A Longden has lectured as part of the academic staff at Liverpool John Moores University in Media, Critical, and Creative Arts, and studied for a MPhil/PhD in Transnational Narratives at The University of Winchester. He is a Fellow HEA, and a Peer-Reviewer for various academic journals. He has been published by Intellect Books and Palgrave MacMillan, and writes on Popular Narrative, Film, Television, Fandom, and Popular Culture. He is currently lecturing at Salford University. 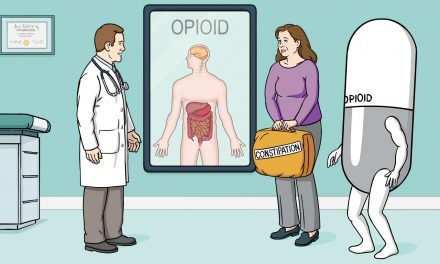 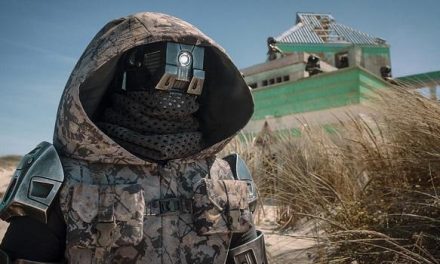 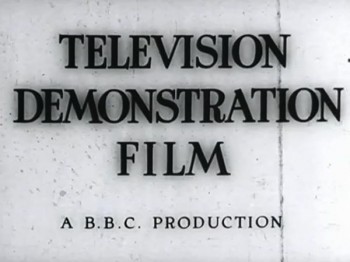 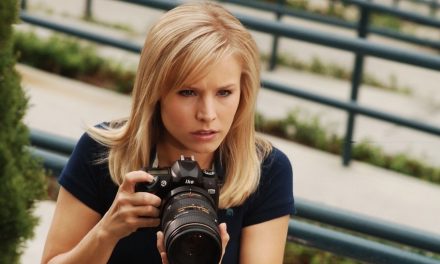