FIDELETY MATTERS: NEVER JUDGE A BOOK BY ITS TV SERIES by William Proctor

Ever since I started exploring adaptation theory as a way to discuss reboots for my PhD thesis, I have found myself knee-deep in a conceptual quandary, one which I’d like to share with you today. The turn to poststructuralism across the academic terrain instructs us to forgo questions about fidelity in favour of dialogic relationships, intertextual borrowings and borrowings-back rather than a comparative analysis between original and copy which inevitably leads towards that age-old aphorism, that is, ‘the book is better than the film’ – or television series and so forth. In many ways, this all began with Robert Stam who recognised that adaptation studies had become too focused on this ostensibly one-way process between source and target text. Scholars, instructs Stam, ‘should be less concerned with inchoate notions of fidelity and give more attention to dialogic responses’ (2000: 76).

Firstly, I am not trying to suggest that Stam is somehow lacking here in his project. Indeed, his clarion call was necessary at the time to lift the field out of the quicksand it was steadfastly sinking into. Notions of ‘original’ and ‘copy’ only serve to validate the source text which, in this case, meant that literature was designated as ur-text, the ‘nucleus of meaning,’ and the adaptation nothing more than a weak facsimile, a violation, an illegitimate ‘child.’

Of course, Stam is quite right to demonstrate that this leads to the idea that adaptation is seen as ‘parasitical on literature’ in that it burrows ‘into the body of the source text and steal[s] its vitality’ (2005: 7). In this way, the adaptation – the copy – is an impoverishment of an ‘original.’ For Stam, this focus continues the project of class dichotomies whereby entertainment is only ‘cotton candy’ and literature represents ‘the gourmet delights’ of culture. This amounts to what Matt Hills (2002) terms a moral dualism, a cultural value system that constructs a ‘good’ object – the ‘original,’ the ‘source,’ the apotheosis of high art – and ‘bad’ object – the copy, the parasite, the nadir of popular culture. Poststructuralism teaches us that a closer inspection shows that these binaries are built on fallacious (and romantic) ideals that collapse once we take our scholarly darning needle and pick at the threads.

Will Brooker informs us that ‘texts cannot fail to brush up against thousands of dialogic threads’ (2012: 47). I completely agree. For Simone Murray, ‘adaptation is a freewheeling cultural process: flagrantly transgressing cultural and media hierarchies, wilfully cross-cultural, and more weblike than straightforwardly linear in its creative dynamic’ (2012: 2). I could not have said it better. As Christine Geraghty (2008: 1) suggests in relation to questions of fidelity, perhaps it is time ‘to move on.’

Is it time to move on? In the same chapter, Geraghty problematises this ‘moving on,’ by rightly pointing out that: ‘faithfulness matters, if it matters to the audience’ (3).

If I can be frank for a moment: for many audience members, especially fan cultures, fidelity matters a great deal indeed and concerns abound in relation to the thorny issue of ‘originality.’ Indeed, this is something which I have personally grappled with for the past few years as one half of me, my ‘poststructuralist self,’ is quite loud and vocal in his pronunciations of dialogism, intertextuality and the absurdity of ‘original vision.’ On the other hand, I have another identity, equally capable of shouting thunderous opinions and battling internally with his poststructuralist counterpart. This other person, this ‘fidelity self,’ cannot help but complain when severe forks in the road are paved within a narrative that substantially departs from the ‘original.’

This metaphor of internal dialoguing with my multiple selves runs the risk of indicating a psychological problem, a personality disorder that I should certainly make an appointment with my local GP to discuss. But this metaphor gets to the heart of what I am talking about today although rather circuitously, I admit).

My own self-narrative notwithstanding, I have had many conversations with ardent readers of The Walking Dead comic book series and its translation into a hugely successful AMC drama.  Not only do the creators veer wildly away from the ‘source,’ but the creative decisions involve much head-scratching and chin stroking on my part hat, more often than not, lead to bouts of frustration and outright fury. In the comic book series (Spoilers!), Rick Grimes wife is venomously shot down by the Governor in a beautifully rendered double-page spread – a ‘splash-page,’ in the vernacular – while she is fleeing for her life with her baby daughter cradled in her arms. The primal power of this scene shocked me when I first turned the page to witness the horror (the horror! the horror!).

In the TV series, she lies down and dies. The emotional trauma of the comic book is not only lost, but shifts the co-ordinates of the narrative substantially that I fear I may have thrown a plate-shaped object at my rather feeble television set (‘they don’t make them like they used to,’ claims my father).

At the University of Sunderland, where I currently teach, my colleague and friend, Rob Jewitt is also a fan of The Walking Dead. We have had many of those ‘water-cooler moments’ (sans water-cooler, of course) where we deconstruct the original and the (sorely lacking) copy and devolve into Neanderthals who gesticulate widely and issue summary execution orders for Robert Kirkman, writer and creator of the comic and ‘creative advisor’ of the series. As a result of the TV series refusing to translate the ‘correct’ version of events, I have since thrown the zombie out with the bath-water and refuse to partake in this blatant lie.

Of course, The Walking Dead has many loyal followers and I have spoken to fans of both TV series and comic book who do not mind the forks in the road. That is their opinion and they are entitled to it (although it’s wrong).

We partake in this idea of originality, of ur-text, even ur-character, all the time. The 1960s Batman TV series is the ultimate bad bat-object which still haunts every single adventure of the Dark Knight. For many, the ‘camp crusader’ is an illegitimate interpretation which must be closeted every time he threatens to burst loose again, armed with shark-repellent spray, surf-board and Bat-dance.

In the 1980s, the casting of Michael Keaton was met with a barrage of outbursts and indignations from the fan community who vocalised their chagrin by insisting: NOT Batman! More recently, Heath Ledger was roundly criticised as resolutely NOT Joker material. Gal Gadot as Wonder Woman (‘too skinny’), Jesse Eisinberg as NOT Lex Luthor and the internet debacle around Ben Affleck’s appointment as the next Batman. This may all change once the audience actually see Bat-Fleck in action (which is what happened with Keaton and Ledger).

My final point is this: texts are intertextual and quote from multiple sources, those ‘thousands of living dialogic threads,’ that Brooker describes.

But, equally, fidelity matters, too.

The poststructural project runs the risk of constructing new moral dualisms within the discipline itself by arguing that fidelity is not an issue any longer. Thus, fidelity criticism becomes an academic ‘bad’ object with dialogic enquiries as apotheosis, the ‘good’ object when in fact it s neither one nor the other. It is dialectical, a tug-of-war between paradox rather than a ‘yin and yang’ situation. I am reminded of Matt Hills’ argument that we ‘must tolerate contradiction without seeking to close it down prematurely’ (2002: 29).

My inner turmoil is illustrative of this process: I am dialectic, a cacophony of voices that cannot be resolved.

You should never judge a book by its TV series or vice versa.

We all do, though.

William Proctor is a lecturer and PhD candidate at the Centre for Research in Media and Cultural Studies, University of Sunderland. His thesis investigates the reboot phenomenon in serial fiction (comic books, film and TV). William has published article on the reboot in Scope: An Online Journal of Film and TV Studies (‘Regeneration and Rebirth: Anatomy of the Reboot’) and Scan: The Journal of Media Arts Culture (‘Beginning Again: The Reboot Phenomenon in Comics and Film’). He is also creator and editor of the blog, ‘Infinite Earths’ [infiniteearths.co.uk]. 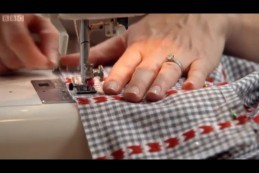