Actors of East Asian descent have traditionally not received much screen time in Anglophone television drama: high-profile roles for such actors in British television drama have been, and continue to be, elusive (Knox forthcoming). Across the Atlantic, as Darrell Hamamoto established in 1994, ‘Asian Americans on network television programs exist primarily for the convenience and benefit of the Euro-American lead players.’ (206). And still today, some important exceptions such as Fresh Off the Boat (ABC, 2015-present) notwithstanding, Asian American actors generally occupy the role of side kick in US television. So, it is refreshing to see, especially in light of the current debates about representational diversity, a high-profile drama production chock-full of actors of East Asian descent, namely Netflix’s original series Marco Polo (2014-present). This drama has received mixed reviews at best, with much of the writing and politics of representation rightfully gathering criticism.[1]

For example, picking up on the series’ use of Orientalist stereotypes, Zac Cheney-Rice has commented that:

The pattern [Marco Polo] perpetuates is decades in the making – ever since the “yellowface” heyday of Fu Manchu in the 1930s, Hollywood has correlated Asian-ness with an “Otherized” exoticism, usually with sinister or mysterious subtexts. Not only does this violently narrow the diversity of Asian cultures and histories, it does so in a way that’s consumed by millions of people around the world, thereby etching its ignorance onto the popular imagination.

Along similar lines, Inkoo Kang has noted that

Marco Polo certainly boasts a wide canvas, but it’s actually not much more than a chessboard. The players are frustratingly plastic, with only the next move in mind, and so joyless and fancifully cruel that most of the characters can’t help being read as stereotypes of evil Oriental mustache-twirlers.

Benedict Wong’s Kublai Khan, Olivia Cheng’s Mei Lin, Mahesh Jadu’s Ahmad and Remi Hii’s Jingim in Marco Polo (note that the khan does not even so much as lift a finger when dismissing the guard)

What interests us for the purposes of this blog post is the work of British Chinese actor Benedict Wong as Marco Polo’s Kublai Khan. This is a performance that deserves more acclaim than it has received so far, not least because of the ways in which the acting choices by Wong work to complicate the Orientalist stereotypes bearing down on his role, creating a rich and humanised character heads above the abundance of ‘cardboard’ characters Kang correctly identifies. We will hinge our discussion around one scene in the episode ‘The Fourth Step’ (1.4), in which Kublai Khan, whilst receiving a head massage from Mei Lin (Olivia Cheng), receives a report by his son Jingim (Remi Hii) and economic advisor Ahmad (Mahesh Jadu) on the Song rebels, who have requested a parlay. The scene can be found from 4.12 – 6.24 here:

In the scene, as the camera tracks back from a close-up of Mei Lin’s face to a medium long shot of the khan, Wong’s character is revealed to be sitting on an armchair, enjoying his head massage. Captured predominantly in a medium close-up, he remains seated throughout, never once even so much as leaning forward, moving his hands only twice, and keeping his eyes semi-closed for much of the scene, focusing on the pleasurable massage. With his massive frame – Wong put on over two stone for the role – remaining largely stationary, it could be tempting to think of Wong as not doing much here, but in fact, the acting choices he makes are no less effective for being subtle; indeed, quite the opposite. 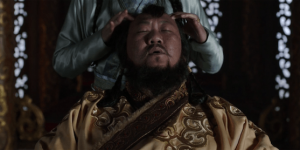 Spot the difference: Wong’s Kublai Khan’s response (such as it is) to the arrival of Jingim and Ahmad and the news of the Song rebels’ request for a parlay

That Wong’s character remains focused on the pleasurable massage for much of the scene makes a significant contribution to Kublai Khan’s characterisation and the dramatic density of the encounter. Keeping his eyes almost closed, repeatedly purring with pleasure, and with his tongue almost lolling out of his mouth at times, Wong’s Khan certainly does not look or, indeed, act like one would expect from a character of his status and position. Foregoing the more conventional comportment associated with a commanding presence, Wong here reflexively underlines the eminence of Kublai Khan, grandson of Genghis Khan, as someone above the typical performative requirements of a leader. Underplaying his status, Wong’s Khan shows no visible sign that he is noticing the arrival of Jingim and Ahmad, nor recognising this as worthy of his attention. Reinforcing the power relationships in play, Kublai Khan’s ostensible passivity, his lack of action and movement, impress upon his visitors that, despite their position of importance in Khan’s court, they are of lesser importance than his own personal pleasure and that he himself is above any social etiquette. This visibly wrong-foots Jingim and Ahmad from the outset, and by withholding a readable reaction to their arrival and the news of the Song rebels’ request for a parlay, he is also denying them the opportunity to use any reaction by him to, for example, adjust their views to his and attempt to curry his favour, thus playing with them, much like a cat might do with its prey.

He doesn’t take kindly to getting sassed: Wong’s Khan uses performance as a strategy

Wong’s Khan intersperses his ostensible passivity with little movements and noises that, through their contrast with his general inertia, are striking in terms of their impact. When his Khan receives a somewhat impudent response from his son for enquiring about Marco Polo, Wong moves Olivia Cheng’s fingers off his temples, fully opening his eyes for the first time in the scene. His eyes are hard and bright, with no visible traces of the pleasurable reverie he has been experiencing, and he widens them as he fixes his son with a piercing gaze. This use of his eyes shows that, his evident enjoyment of the massage notwithstanding and no matter that he looked almost vulnerable, like he had let his guard down, only moments before, a khan is always alert, ready to strike and assert his authority, even (and perhaps especially) where his heir is concerned. Wong’s Kublai is not only beyond performative conventions, but also makes use of performance as a strategy to lure others into traps; here luring his son into a false sense of security that the khan is in a mood of reverie and not at his sharpest or most attentive, only to ambush Jingim swiftly. (This foreshadows the way in which Khan will choose to deal with the Song rebels, whom he will want to lure into believing that they have the upper hand over the Mongols after Jingim’s recent defeat.) 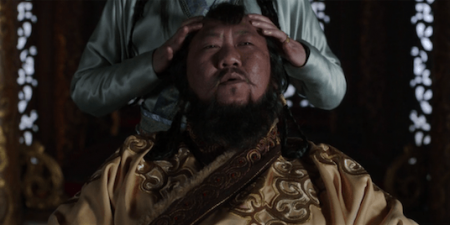 ‘Oh, I wonder what disturbed him so’: Wong transcends the script

Then, when he hears that Marco Polo’s been experiencing problems sleeping, Kublai Khan comments: ‘Oh, I wonder what disturbed him so’. Here, Wong adds a little chuckle to the ‘oh’, which he is likely to have ad-libbed, and has a hint of an amused smile play around his facial features. By suggesting that Benedict Wong has likely ad-libbed an interjection that was not in the original shooting script, our discussion here touches on one of the perennial methodological challenges when analysing what it is that actors do when they act, namely that such analysis should (at least) endeavor to consider the processes actors employ and experience, yet often all that is available to such analysis is the finished on-screen performance. In his work on screen acting and performance choices, which includes a close analysis of two scenes from Burn Up (Global Television/BBC2, 2008), Trevor Rawlins has offered the following pertinent reflection:

No published script [of Burn Up] exists and even if it did it would probably be based on what appears on screen and may well differ from the original shooting script. This is far from unusual as much can change during the production, and indeed post production, phases of making a piece of film or television. This is one example of the unstable nature of analysing actor’s performance choices and reflects the nature of my research, which is based on many things that are unfixed, unstable and ephemeral. My speculation is informed speculation. (2010, 7)

Meaningful engagement with the unstable object of our analysis, namely what actors do when they act, cannot be made more easily manageable through reference to other objects such as scripts, especially when those themselves are far from fixed. So, just as Rawlins uses his own professional experience, we draw on our combined scholarly and acting expertise ‘to make some assumptions based both on what can be seen on screen and what the shooting script may have originally said.’ (Rawlins 2010, 7) Working backwards from the finished on-screen performance, it is our informed speculation that in the shooting script, the line ‘I wonder what disturbed him so’ would have appeared very different from how it is delivered by Wong, and not necessarily suggested, let alone dictated, the air of amused knowingness that he bestows upon it through the ad-libbed ‘oh’, the chuckle in his voice, the hint of a smile and the slight elongation of the final ‘so’.

Given the general weakness of the script, we give the credit for what makes the line, the scene and indeed the character overall interesting to Benedict Wong. Wong could have played the line as a straightforward enquiry about Marco Polo’s sleep, leaving out the ‘oh’, the chuckle, the hinted smile and the slight elongation of the ‘so’. This would have reduced the richness of his response (shifting between pleasurable reverie, hard alertness and sly amusement) and characterisation, here removing the suggestion that Kublai possesses relevant knowledge that he is withholding and thus weakening the systematic undercurrent of the khan playing mind-games with his inner circle within the scene. Working with weak scripted material, Benedict Wong as Khan works hard to gain and develop strong subtext for his performance, which in turn elevates the script. In the context of Stanislavskian approaches to acting, Sharon Marie Carnicke has noted that:

Actors infer the content of subtext by noticing inconsistencies between what is said and done, or by apparent nonsensical shifts in conversation. Actors communicate subtext through non-verbal means (body language, the cast of the eyes, intonations and pauses). (2010, 12)

Benedict Wong, who did not receive conventional drama school training, but took a performing arts course at Salford Technical College, almost quit the acting profession, as The Guardian’s Rachel Aroesti pithily observes, ‘after being offered one stereotyped bit-part too many. Now, as Kublai Khan in Netflix’s Marco Polo, he’s ruling a fifth of the known world.’ His Kublai Khan exhibits no cardboard, but a depth and richness of characterisation, and it will be fascinating to see how he will develop the role which he has made so much his own in Marco Polo’s forthcoming second season. Benedict Wong has expressed his desire to helm a British drama series, and it is to be hoped that he will soon be given this opportunity and more high-profile television material worthy of an actor of his talent and skill.

[1] A useful overview of critics’ responses to Marco Polo and the representational issues at stake can be found here. 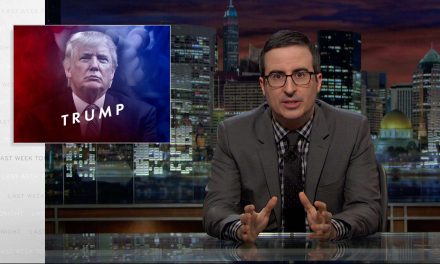