NON-HUMAN PERFORMANCE, MISE-EN-SCENE AND THE TRANSNATIONAL: SKIPPY THE BUSH KANGAROO by Jonathan Bignell

How might we describe and evaluate non-human “performances” in television fiction? I blogged a while ago about the performances by puppets and machines in Thunderbirds (ITV 1965-66) and wrote a chapter (Bignell 2019) about them and other non-human actors. This blog outlines a few of these ideas in relation to the Australian drama Skippy The Bush Kangaroo (ITV 1968-70). For Skippy to play her part in the fictional world, a kangaroo needs to function as an expressive “performer”. Skippy needs to be a subject, “her”, rather than an object, “it”. 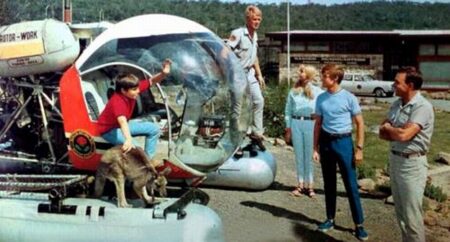 Fig. 1: Sonny, Skippy and the gang

Skippy was portrayed as an intelligent, helpful and usually compliant companion to nine-year-old Sonny Hammond (Garry Pankhurst) who lives with his father Matt (Ed Devereaux), Head Ranger at Waratah National Park, north of Sydney (Fig. 1). She is somewhat like a family pet, living with the Hammonds and their teenage house-guest Clarissa ‘Clancy’ Merrick (Liza Goddard) and research scientist Dr Anna Steiner (Elke Neidhardt). Storylines in Skippy featured rescues, protecting the park from rustlers, smugglers and escaped prisoners, and the domestic tensions between Sonny, his father and Sonny’s older brother Mark (Ken James). Skippy is a companion and helper for humans, with agency and character, but she is subordinate to them and the series’ narratives are driven by people rather than herself. In the pilot episode, ‘Man from Space’, for example, Sonny sends Skippy to fetch help when they discover a downed pilot whose parachute is stuck in a tree. She is at an intersection between a human world and the wildness of the bush from whence she comes. I want to argue that screen dramas with animal characters work over the problem of human relationships with the non-human. Skippy is not just a kangaroo; she is a part of the natural world that is sufficiently self-aware and intelligent to take part in television storytelling about a human world.

The Skippy series were made for a transnational television market. Their creator Lee Robinson designed the format after a research visit to the USA, where he was inspired by Flipper (1964-67) in which a widowed park ranger and his two sons befriend a dolphin on the Florida coast, which helps them in various maritime adventures. Placing a kangaroo at the centre of Skippy signified Australian distinctiveness, such as cultural values of outdoor vigour and male sociality (“mateship”) announced in the jaunty banjo theme song that described Skippy as “our friend ever true”. Australian TV mogul Frank Packer financed the series, which sold to 128 countries. Britain’s various ITV regional broadcasters acquired Skippy at different times, starting in 1968, and it became a fixture of children’s television. 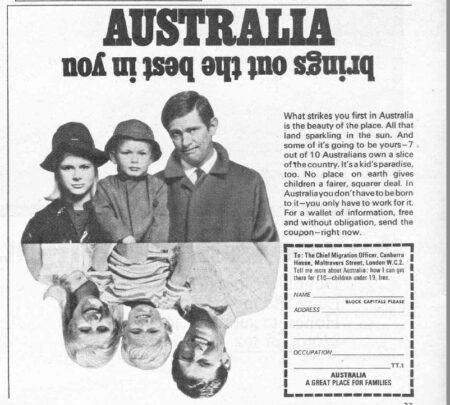 As a former British colony, imperial possession and then member of the Commonwealth, there were many kinds of exchange between Britain and Australia. The sunny outdoor life represented in Skippy aligned with the ways Australia was marketed to British emigrants (Fig. 2), for example. Employment, housing and leisure opportunities were used to attract white Europeans with marketable skills to go and grow the Australian economy. Cricket teams travelled back and forth for Test matches, as did popstars the Bee Gees, who had been British emigrants to Sydney in the 1950s but returned to London in 1967 and rivalled the Beatles in popularity. British programmes such as Coronation Street (ITV 1960-) were common on Australian television, and when veteran actress Violet Carson, who played Ena Sharples, visited in March 1968 while Skippy premiered in Britain, TV Times gave extensive coverage to her enthusiastic reception (200,000 fans turned out to see her in Adelaide, for example (Carson, 1968)). The two countries’ relationship was complex and was expressed in part through television exchanges.

Performance in most television fiction works hard to disavow the labour of creating it, concealing conscious effort or self-consciousness. It is not easy to do, as Gary Cassidy and Simone Knox’s blogs about actors’ achievements in TV have shown. The problem with human actors is that they are self-aware, as the Soviet filmmaker Lev Kuleshov (1974: 99) proclaimed. He argued that a natural effect was best exemplified by the deft motions of a skilled factory worker or “the filming of children or animal movement” because of its “profound innocence, naturalness, and simplicity”. Mechanical or animal action best serves the ideologies of screen representation because it is free from self-consciousness and conventionalisation; animals do not pose for the camera (Fig. 3). Animals fulfil the ambitions of screen acting theorists like Kuleshov in that they become embedded seamlessly in the mise-en-scène. 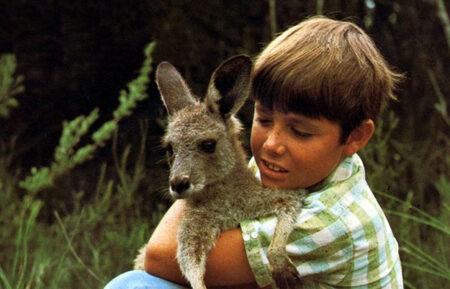 As long ago as Erving Goffman’s The Presentation of Self in Everyday Life, studies of performance have stressed the relationship between performer and audience, and the conventions around behaviour and its contexts that the audience adduces when recognizing something as a performance. For Goffman, the process of framing something (on stage, or in a framed image) is important, and this stresses how performance belongs among the making, shaping and showing activities described collectively as “mise-en-scène”. The notion of mise-en-scène draws attention to the work done behind and in front of the camera. Because of the limited degree to which animals can be expressive, there is excessive expression in television programmes like Skippy in other ways. The actions of the kangaroo are enfolded by music, sound effects, point of view and shot reverse-shot patterns that provide narrative tension, pace and dramatic shape, to make up for the limited expressivity of the animal actors.

In Skippy the labour of production and the skill of its achievement are on show but are also concealed by illusionistic techniques. The conventions of continuity editing and the system of using long, medium and close shots to create a coherent filmic space are used to suture the kangaroo into the narrative like a human character. Storylines allow the animals to show off their apparent capabilities, against the backgrounds of realist settings. Animal trainer Scotty Denholm used nine female kangaroos to portray Skippy, keeping each one dormant in a sack until needed because of their tendency to hop off into the bush. Because the kangaroos’ movements were impossible to control precisely, the production used a stuffed kangaroo for rear shots, and kangaroo forearms (souvenir bottle openers sold to tourists) were manipulated by the crew in close-up shots that required Skippy to seem to pick up objects or open door-handles, for example. The crew gave the kangaroos chocolate, gum or grass to make them move their jaws so that Skippy would appear to vocalise, but the clicking sounds she apparently made were actually a post-production effect, added to enable her to “converse”. Much human ingenuity was expended to make Skippy into a character, blending animal performances with practical effects and post-production work.

The non-human Skippy character’s agency and her special connection with Nature make the programme pleasurable and potentially troubling. Skippy invites questions about what performance is, and the ethical relationships between human and non-human “things” in our environment (Derrida 2002, Haraway 2003). She is tame but wild, a character but also an aspect of inarticulate Nature. Skippy belongs in the protected but untamed landscape of Waratah National Park in a way that the human actors do not, and she is part of a European discourse about Australia as both familiar and strange, both Edenic and alien. Skippy invites us to consider how Nature is colonized and domesticated, but she also retains some of the uncanny otherness that becomes visible in television fiction when animal performances are shaped and contained by human labour.

Jonathan Bignell is Professor of Television and Film at the University of Reading. He remembers watching ITV in London in March 1968 and thinks he watched the UK debut of Skippy. Now, Jonathan works on histories of television drama, cinema and children’s media. This blog is based on a section of his chapter in Television Performance (ed. Lucy Donalson and James Walters). Some of Jonathan’s work is available free online from his university web page or from his academia.edu page.

Goffman, Erving, The Presentation of Self in Everyday Life (NY: Doubleday, 1959). 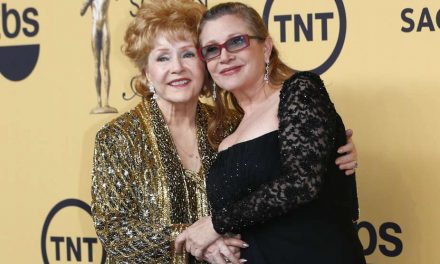 THE CARRIE DIARIES: FROM TEENAGE VIRGIN IN THE SUBURBS TO SEX AND THE CITY by Susan Berridge