The HBO drama, Watchmen, is part of an ever-growing canon of comic books adapted for TV. Taking place 34 years after its print publication, the TV series refocuses the comic’s deconstruction of Cold War anxieties by exploring ongoing racial tensions in Tulsa, Oklahoma.

The narrative centres on the rise of a white supremacist group, which has waged war on the Tulsa police. As the series develops, it explores US racial tensions in the past and present. It is here that it provides a valuable insight on what the Slovenian philosopher, Slavoj Žižek, refers to as a “parallax view”. 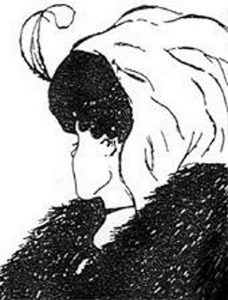 Parallax view: What do you see – old woman, or young woman?

Parallax can be defined as the apparent displacement of an object, caused by a change in observational position. We have all experienced and seen examples of parallax, such as the optical illusion of the woman who from opposing perspectives is both old and young. Parallax refers to the fact that what you see (young woman or old woman) depends on a change in your observational position.

What is unique in Žižek’s application of the term, however, is his philosophical argument that the difference in observation is not a “subjective” alteration but rather part of the “objective” image (and reality). A “minimal difference” from which each perspective forms part of the “image” itself. In that way, the image you see, the old or the young, is a mediated part of the single image.

As a result, Žižek contests that there is never a complete image of reality – you can never see the old and young women simultaneously. Instead, reality is constituted and maintained through a “parallax gap” that is created by the minimal difference within reality itself. In that way, it is the disconnect between the old and young woman that is the image and “parallax” involves switching between each image.

When considered in relation to our conception of time, we can apply Žižek’s “parallax view” to the linear relationship that typically underscores our understanding of past and present. This sense of parallax is dramatically explored in episode six, This Extraordinary Being, and in the hallucinations of the Tulsa Police detective, Angela Abar (Regina King).

Disturbing the past; traumatising the present

Angela overdoses on a bottle of “Nostalgia” pills – a fictional supplement that allows its user to relive past memories. In the Watchmen universe, the pills should not be shared between users nor should they be consumed in large single doses. Unfortunately, Angela swallows an entire bottle of her grandfather’s pills. As a result, she experiences a hallucinatory trip, where her own present reality melts into her grandfather’s past.

Clever editing reveals that Angela has merged with her grandfather, allowing her to embody his memories. Transported to his graduation in 1938, the camera swings to Angela dressed in a smart officer’s uniform, it then pans-out to include the rest of the class and eventually swings back to Angela, where in her place we now see her grandfather, Will Reeves (Louis Gosset Jr).

Here, the episode’s direction permits us to observe Angela’s “parallax view”, with the displacement allowing her to inhabit the past in the present. In doing so, the past occupies the position of a “parallax object” – with its sense of incompleteness and unknowing attraction always disturbing, lingering and traumatising the present. 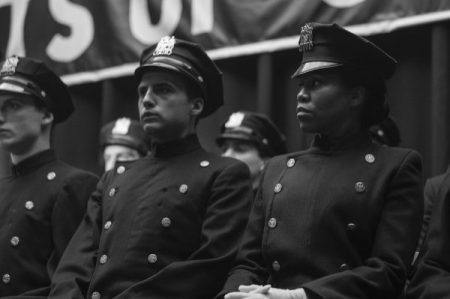 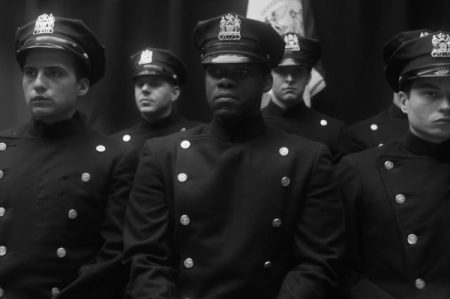 … her grandfather’s memories of his time in the Tulsa police force.

As Angela experiences more of his memories, we learn that, while subject to forms of institutional racism, Will becomes disillusioned with fighting crime in a city that seems to be descending into open forms of racist provocation. He also discovers that the police force harbours members of the Ku Klux Klan (KKK), who exist as a secret organisation called Cyclops.

After the department’s “Cyclops” members attempt to lynch him, Will becomes the first superhero vigilante – Hooded Justice. This episode cleverly reinvents the Hooded Justice origin story. Contrary to an established version that originally believed Hooded Justice to be a white, German circus strongman, Hooded Justice was in fact born from the traumatic experiences of a black man whose life had been marked and moulded by racial violence.

These revelations highlight the similarities of Will’s past with Angela’s present, who serves as a masked detective called Sister Night for the 2019 Tulsa Police. She also comes to realise that her boss, police chief, and friend, Judd Crawford (Don Johnson), is secretly leading a racist organisation, the “Seventh Cavalry” (a present-day continuation of the “Cyclops” group).

Through the revelation that Hooded Justice was in fact a black police officer, the episode is able to offer wider comments upon the effects of historical revisionism. Over the course of the series, Angela’s story plays out against a popular television show “American Hero Story” (a parody of American Horror Story), which depicts Hooded Justice as a white vigilante, hiding both his face and his sexuality.

Instead, the memories reveal that Hooded Justice’s true identity remains “hidden” behind the literal masking and whitewashing of Will Reeves, who, in his Hooded Justice costume, chooses to conceal his black skin under a mask and white make-up. For both Angela, and the audience, the episode performs a subtle revision of the Hooded Justice origin story, revealing how our perceptions of the past can undergo a parallax shift in the present.

It is here that the episode exposes how the past can, for many, remain largely untold, obscured and incomplete. The racial antagonisms in both Will’s past and Angela’s present play out in a historical narrative that seeks to examine the ongoing effects of trauma across generations. 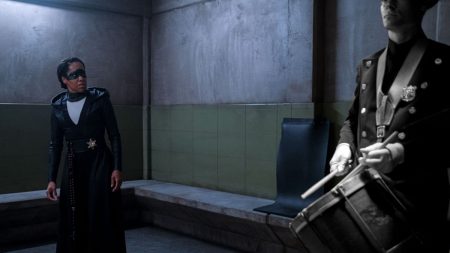 Vivid recollections of the other’s memories, and intersections of past and present in Watchmen (HBO, 2019).

Ultimately, the episode, and the series, can say something more about how we relate to the past. How we approach ongoing tensions in race relations through fictional settings and better understand our past-present asymmetry. Rather than ignoring or (re)inventing the past, what the episode’s writers and directors provide is an opportunity to begin exploring the significance of a past-present parallax in popular television formats.

It is through this position of a past rendered explicit in the present (and vice versa) that we can re-approach our relationships to forms of historical trauma and repression as they continue to be enacted, performed and understood in the present.