SQUID GAME AND THE REPRODUCTION OF KOREAN WOMANHOODS by Sarah Molisso

Squid Game (2021-) is yet another successful export from South Korea, demonstrating the transnational mobility of Korean popular culture, and further cementing its status as a soft power juggernaut. The series has widely been framed in terms of neoliberalism and precarity. However, Squid Game’s popularity has come at the expense of its mistreatment of female characters (as well as the other minority characters in the show). This paper looks at the portrayal of women in Squid Game, locating it in critical literature about gender and media in South Korea, and discussing it in relation to victim/survivor, filial piety, Wise Mother Good Wife vs. vixen, and kimchi/soybean-paste-girl.

South Korea (hereinafter Korea) has seen an increase in the expression of misogyny and gender-based violence following the 1997 Asian Financial Crisis and aided by militarised and neoliberal masculinities (Park, 2016). Along with Korea’s emergent neoliberal identity, young women have been blamed for the discontent experienced by young men due to the economic recession and rise in economic precarity (Kim, 2021). Squid Game is no different in its misogynistic discourse. In Episode 5, ‘A Fair World’, one of the pink soldiers, Worker Number 28 (Heo Dong-won) reveals to the police officer, Hwang Jun-ho (Wi Ha-joon), that the pink soldiers had taken turns in ‘having sex with the girl’, that is, engaging in the rape of a dead female player. In a different scene in the same episode, the Front Man (Lee Byung-hun) tries to resume equality among the players after learning of the unfair advantage that Player 111 (Yoo Seong-ju) had: ‘Whether you sell the dead bodies’ organs or eat them or whatever, I don’t give a damn. However, you ruined the most important aspect of this place. Equality. Everyone is equal while they play this game.’ Of course, not everyone is equal. There is no discrimination in whose organs are harvested, but in terms of sexual assault, the pink soldier said, ‘Would we have done that to a guy?’. Would we have engaged in the sexual assault of a guy? Of course not, how disgusting. This entrenched homophobia and misogyny is reflective of Korean society at large. In the 2021 Global Gender Gap Report (World Economic Forum, 2021), out of the 156 countries evaluated, Korea came in at 102. The state is not made equal, and women, along with other marginalised groups, suffer at the hands of it. Violence against women is prevalent in Korea: at least one woman was killed or seriously injured by her male partner every 1.8 days in 2019 (Kim, 2020). Squid Game’s focus on the pitfalls of neoliberalism ignores the very negative way that neoliberal practices have specifically affected women. By repeating tropes that exist in cultural and media imaginaries in Korea, the women of the show miss out on portraying their own gendered realities, and instead exist as supporting characters for the main stars of neoliberalism and the show: men.

Much has been written on the relationship between (neo)Confucianism and neoliberalism in Korea (for example, see Shin (2019); Song (2010); Lew, Choi and Wang (2011); Kim and Park (2003) to name a few), and these ideologies have spawned roles for women. This section will look at a few of these specific types of womanhood: victim/survivor, filial piety, Wise Mother Good Wife vs. vixen, and kimchi/soybean-paste-girl.

Patriarchal nationalism, with women as signifiers of purity, has helped make the ‘comfort women issue’ (the forced sexual slavery of women from Korea and other countries in Southeast Asia by the Imperial Japanese Army) an issue of women’s solidarity (Kwon, 2019). This implies that women are victims of sexual assault when the oppressor is anti-Korean. However, many contemporary victims of sexual assault and violence in Korea have been left unprotected by the state. Ji-yeong (Lee Yoo-mi) is a victim/survivor of (sexual) assault, having recently been released from prison, and is the most accurate representation of contemporary womanhood in Korea out of the four discussed in this blog. In Episode 6, ‘Gganbu’, Ji-yeong alludes to her own physical and possible sexual abuse, ‘When he hit her [her mother] and did the things he did to me’. 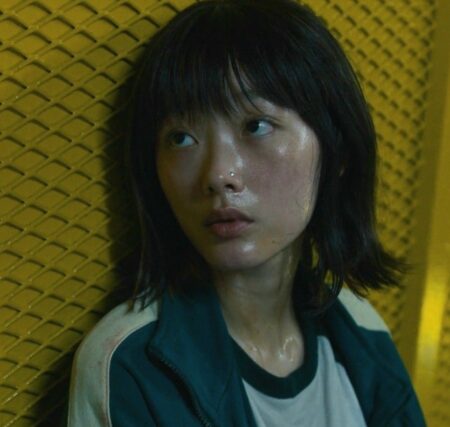 The Korean National Statistical Office (2022) figures for the crime rate of sexual violence shows a rate of 12.3 per 100,000 population in 1997, rising to a peak of 63.9 in 2017, and an equally equally high number of 58.1 in 2020.[1] Ji-yeong’s background parallels the double standards that have been seen in the quick response to arresting a female perpetrator of molka crimes where the majority of perpetrators are male (McCurry, 2018). In 2018, there was a national outcry at the swift arrest of a woman who had illegally uploaded a picture of a nude male model. Image-based sexual abuse is prevalent in Korea and takes place in the form of spy-cams, also known as molka. In 2017, 6,465 cases of molka were reported, 5,437 perpetrators were arrested, but only 119 (fewer than 2%) were jailed (BBC, 2019; Human Rights Watch, 2021).

Sexual assault and violence have been a mainstay in popular media. The depiction of the characters in the 2011 film Silenced, adapted from Gong Ji-young’s 2009 novel The Crucible, based on the historic sexual assaults that took place at Gwangju Inhwa School for the Deaf, has several similarities to those in Squid Game. The following description of a character in Silenced can be seamlessly applied to Kang Sae-byeok (HoYeon Jung): while Sae-byeok is fierce and independent, she is ‘reduced to a supplementary figure to the hero… [her] sweetness and sorrow simply provides a nice backdrop to the heroic struggle of the male protagonist’ (Park, 2016: 37). Park further argues that the movie version of The Crucible was more popular than the novel because the movie safely reinscribed more traditional gender norms: a moral duel between male villains and a lone male saviour, with supportive women as the backdrop,’ (Park, 2016: 37). Again, this quote could be just as easily applied to Squid Game. Sae-byeok is in the games due to filial piety – a North Korean defector intent on paying for the care of her brother and safe passage of her mother.

The neo-Confucian Joseon period oversaw strict social codes to ensure the subservience of women, including the Three Rules of Obedience (sam-jong ji-do): obedience to her father, her husband, and then when her husband died, her son. Ethical codes like this and like ‘the Three Bonds and the Five Relationships’ (sam-gang o-ryun) – which were: subject loyalty to the sovereign, filial piety, the distinction between husband and wife, status of elder over younger, and loyalty between friends – prevented women’s mobility and development (Yoo, 2008). Han Mi-nyeo (Kim Joo-ryoung) (meaning beautiful female in Korean[2]) exists in opposition to the Wise Mother Good Wife trope which places women’s reproductive value highly in the domestic sphere (Kim, 2016). 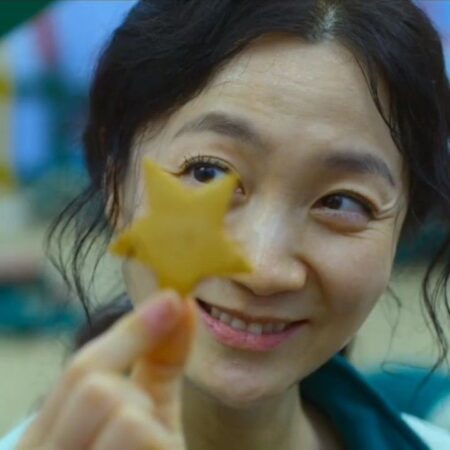 In Squid Game, Mi-nyeo is portrayed as a vixen. Her deviances include smoking, swearing and the use of her sexuality for protection. Director Hwang Dong-hyuk has said of Mi-nyeo and Jang Deok-su’s (Heo Sung-tae) sex scene that ‘the woman relies on the strongest man in the group… She believes it’s love – otherwise it’s too sad, you know, to sell sex to the guy just to survive…’ (Jeffries, 2021). Mi-nyeo personifies self-reliance and self-governance (selecting Deok-su for protection yet killing him when he abandons her), and Hwang’s vision of her mitigates the violation that selling sex has on the ‘neoliberal ideals of relational heterosexuality and middle-class femininity’ (Cheng & Kim, 2014: 357).

The only missing portrayal of womanhood in Squid Game is the kimchi-girl/ soybean-paste-girl trope, perhaps because she is too much of an obvious target of misogyny. Soybean-paste-girl has been used to assert a negative portrayal of women as selfish and materialistic (Song, 2014), and kimchi-girl evokes the manipulative qualities of women who simultaneously appeal to men, impinge on their rights, yet insist on gender equality (Kim, 2018). These women supposedly chase conspicuous luxury items while being supported by a man, or by having to resort to eating cheap meals (hence, kimchi or soybean-paste) in order to fund their lifestyles. These terms were popularised on the far-right internet community, Ilbe, and even alluded to in Psy’s 2012 hit Gangnam Style.

Why then, was this trope left out of Squid Game? New forms of femininity emerged in the early and mid-2000s as a direct result of Korea’s emerging new neoliberal identity. Starbucks opened its first shop in Korea in 1999, and the consumption of its coffee was seen as an ‘aspirational act of consumerism’ (Song, 2014: 430), linked to class and gender differences. Song’s (2014) study shows how women navigate Starbucks as a way to subvert gender norms which Song argues are ‘defined by the codes of Confucian patriarchy’ (Song, 2014: 431). The coffeehouse provides women with a ‘third place’ that exists outside of the family and ‘dominant systems of patriarchy’ (Song: 2014: 435). For women, Starbucks was a space that signified privilege, linked to Western lifestyles, but to men, Starbucks was too frivolous, leisurely, and took time and money away from Korean products.

Starbucks also represented the negative implications of US cultural imperialism, and heightened the tensions among identity formations, although this backlash was most strongly targeted towards the female middle-class consumer, soybean-paste-girls. These women existed in direct opposition to the ideal virtuous woman (as seen in Wise Mother Good Wife), traditionally desired for marriage. Kimchi/soybean-paste-girls then were women reclaiming an identity away from tradition in the backdrop of neoliberalism. Similar to modern feminist identities in Korea today, these women have been left out of Squid Game in a further (unconscious?) attempt to diminish the role of women in society.

Squid Game’s overwhelming popularity has occurred in tandem with the reproduction of outdated and often misogynistic tropes of women in Korea. In Korea’s militarized and neoliberal society, ‘brutality against the weak is routinized and normalized’ (Park, 2016: 20). The examples of womanhoods that Squid Game has chosen to portray are all of weak women, formed in a heavily patriarchal society. This is with the exception of Mi-nyeo, who exists in opposition to the Wise Mother Good Wife trope and furthers Deok-su’s villainous status. This is again replicated in Korea’s second biggest Netflix export, All of Us Are Dead (Netflix, 2022), where a scene of sexual violence against a student in the first episode is used to further solidify Yoon Gwi-nam’s role as the antagonist. It will be interesting to see if the next series of Squid Game showcases any meaningful depictions of women, rather than reproducing tired tropes and ignoring the economic and social precarity, and real violence, faced by women today.

Sarah Molisso is a doctoral researcher in the Sociology department at City, University of London. Her PhD working title is ‘South Korean Online Feminisms: The Dissemination of Feminist Ideas in Webtoons on Instagram’. Alongside her research, Sarah currently works on Operation Soteria Bluestone, a National Police Chief’s Council (NPCC) led, and Home Office funded research and change programme, which aims to transform the policing response to rape and serious sexual offences in England and Wales.

[1] The classification name was changed to ‘sexual violence’ in 2014 and has included rape since 2002.

[2] Standardized translations of the suffix -nyeo in misogynistic hate speech do not use ‘female,’ but rather ‘girl’: 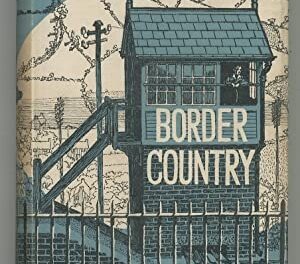 ARE YOU BEING… ALIENATED? by Elke Weissmann