Kennedy set so much in motion in such a short period of time that the outcome of each narrative was unclear.

The Kennedy assassination still marks a shared milestone for most Americans whether or not they were alive on November 22, 1963.  The psychic rupture it caused is the subject of writer-director Stephen Ives’ ‘1964,’ his latest contribution to PBS’ flagship historical series, American Experience.  Based loosely on Jon Margolis’ The Last Innocent Year: America in 1964, this two-hour documentary set to premiere on January 14, 2014 is structured around many of the events and issues usually associated with the 1960s, such as the coming of the Beatles and the ascendancy of rock ‘n’ roll, the first year of the Johnson presidency and the birth of the ‘Great Society,’ Freedom Summer and the nationalizing of the civil rights movement, the 1963 publication of Betty Friedan’s The Feminine Mystique and the surfacing of women’s liberation, the presidential nomination of Barry Goldwater and the kindling of the conservative counterrevolution, the Gulf of Tonkin Resolution and the buildup in Vietnam, and the free speech protests at Berkeley and the rise of student activism.

This overflowing agenda simmered for years beneath the seemingly calm exterior of postwar America before finally boiling over with an unbridled fury that took many people in the country by surprise.  The biggest shock of all was the caesura of the Kennedy assassination that represents a ‘moment of creation of a relative past, the before of a given event and the after of a new present’ (Feuchtwang 180).  ‘1964’ begins with images of people celebrating in Times Square as the celebrated crystal ball drops during the final seconds of December 31, 1963.  The revelers look more like refugees from the Fifties not the Sixties, which no doubt is what Ives and his creative team are intending to suggest.

Historian Daniel Boorstin once observed that the ‘most popular’ method of organizing historical periods is in yearly, decade-long, and ‘hundred year packages.  Historians like to bundle years in ways that make sense, provide continuity and link past to present’ (37).  More often than not, though, history is not that neat and clean.  For all intents and purposes, the era known as the Sixties did not kick into high gear until JFK was assassinated and America had experienced the trauma of his passing.  This turbulent and transformative period also extended well into the early to mid-1970s, culminating with Watergate and the withdrawal of the last American troops from Vietnam.  Through it all, television remained the one constant for most Americans, who could turn on their sets for a brief respite or a quick update on what was happening beyond the screen.

Americans are still using TV to retrospectively revivify, vicariously re-experience, and collectively reinterpret the Sixties.  Throughout November 2013, the U.S. broadcast, cable, and satellite networks were awash with literally dozens of television specials commemorating the fiftieth anniversary of JFK’s assassination.  Predictably, some of these shows were kitschy and exploitative, such as the National Geographic Channel’s adaptation of Fox News commentator Bill O’Reilly’s best-seller, Killing Kennedy, starring Rob Lowe as JFK and Ginnifer Goodwin as Jackie; most however were earnest and mainly dull exercises in repurposing old footage, such as CBS’s As It Happened: John F. Kennedy 50 Years.  One cut above the rest was the two-part four-hour American Experience biography by writer-director Susan Bellows titled simply, ‘JFK,’ which mixed familiar and newly discovered moving and still images with a more nuanced though ultimately admiring portrait of Kennedy and his legacy.

One of the biggest surprises I experienced when researching the 1960s for the Columbia History of American Television was the discovery that the four highest-rated network programs of the decade (beside live television events that interrupted regularly scheduled programming, such as JFK’s funeral and the 1969 Moon Landing) appeared in quick succession over a six-week period between January 8 and February 16, 1964 or only two to three months after the Kennedy assassination.  The second and fourth most-watched shows of the 1960s were the January 8 and 15 installments of CBS’s The Beverly Hillbillies, attracting seventy-two and seventy million viewers, respectively.  On a cumulative basis, The Beverly Hillbillies was the most watched prime-time series of the 1960s, averaging a staggering fifty-seven million viewers a week (or 1 out of every 3.3 Americans) at the height of its popularity between 1962 and 1964.

These two telecasts personified the high-spirited escapist shtick common of most establishment TV at the time.  The January 8 episode, for instance, involves a silly string of mishaps resulting from Granny (Irene Ryan) mistaking a kangaroo for an over-sized jackrabbit; while the January 15 segment revolves around a freeloading Ozark mountaineer who visits the Clampetts in the hopes of marrying off his roly-poly daughter, Essiebelle, to Jethro (Max Baer, Jr.) in order to get his hands on some of Jed’s (Buddy Ebsen) money.

From left to right, Donna Douglas as Elly May, Buddy Ebsen as Jed, Max Baer as Jethro, and Irene Ryan as Granny

In stark relief, the first and third highest-rated programs of the 1960s featured a different kind of entertainment altogether.  On February 9 and 16, CBS’s The Ed Sullivan Show presented the Beatles to a mass American television audience for the first time.  Network TV’s foremost impresario had first spotted the Fab Four while touring England four months earlier just as Beatlemania was flowering throughout the United Kingdom.  Sullivan signed the band for three shows at $75,000 or roughly one-half of what he paid Elvis back in 1956-1957.

The Beatles appeared on The Ed Sullivan Show for the first time on February 9, 1964.  From left to right, Ringo Starr, George Harrison, Ed Sullivan, John Lennon, and Paul McCartney

In turn John, Paul, George, and Ringo drew nearly seventy-four million viewers for their U.S. television premiere on February 9; a week later seventy-one million more Americans tuned to see what all the fuss was about.  As smartly-dressed, well-mannered, and benign as the early Beatles looked on coast-to-coast TV, they nevertheless provided a glimpse of an emerging, youthful counterculture that would soon sweep across North America and Western Europe during the rest of the 1960s and into the early 1970s.  The Beatles offered their fans an irresistible alternative to the mostly well-worn traditions of establishment television.

From left to right, Paul, George, John, and Ringo standing behind a stiff round-shouldered Ed Sullivan presented an obvious clash of generational styles and sensibilities.

The four Beatles surrounded Sullivan with their slightly deviant hairstyles, Pierre Cardin collarless jackets, and Cuban high-heeled boots.  Their personal charm radiated outward complementing the overpowering sound they had just produced on stage.  Predictably, the establishment press panned the band and their performance.  The New York Times dismissed the Beatles as merely ‘a fad’; the New York Herald Tribune pronounced them ‘75 percent publicity, 20 percent haircut, and 5 percent lilting lament’; and the Washington Post inexplicably called them ‘asexual and homely’ despite the nonstop screaming evidence to the contrary provided by Sullivan’s live studio audience (Spitz 473).  The intense disapproval expressed by adult critics across the country merely confirmed the fact that the Beatles were a phenomenon that the older generation neither tuned into nor understood.

Universal-International Newsreel footage of the Beatles 1964 Arrival in America

In contrast, younger viewers were completely enthralled by the original music, the thoroughly contemporary look, and the mildly rebellious attitude.  Being British, the Beatles also possessed an international cachet for American audiences that eluded Elvis.  Signs of change were everywhere as young people on the tail end of the silent generation as well as their baby boomer brothers and sisters embraced this new mod lifestyle.

Not surprisingly, CBS is planning a TV special on February 9, 2014 to commemorate the 50thanniversary of the band’s debut on The Ed Sullivan Show entitled, The Night That Changed America: A Grammy Salute to the Beatles, featuring Paul, Ringo, Yoko Ono, and Olivia Harrison, along with Justin Timberlake, Lady Gaga, Adele, Bruno Mars, Pink, and Katy Perry performing the songs the group played that night.  K-Ching!  K-Ching!  A much better alternative for putting the Beatles and, more importantly, a historical turning point of extraordinary pent-up energy and change into perspective is the January 14 telecast of ‘1964,’ which will also be available the next day for viewing online at PBS Video.

The major strength of ‘1964’ is the diverse cross-section of twenty-five witnesses and expert commentators who remember and react to a kaleidoscope of characters and happenings that populate an unavoidably busy narrative.  One of the challenges of television documentaries such as ‘1964’ is to steer clear of the Billy Joel effect of merely presenting an overcrowded listing of headlines and celebrities as the singer-songwriter did in ‘We Didn’t Start the Fire.’  The many voices in ‘1964’ serve to slow down the pacing and personalize the proceedings as is the case with sportswriter Robert Lipsyte in the first sequence when he recounts covering the well-publicized photo op between the Fab Four and Muhammad Ali in February 1964: ‘The Beatles!  Cassius Clay!  I mean this was the toppling of the order that was my generation and it was thrilling.’

Once the Beatles and Ali leave the stage, however, the remaining eighty percent of ‘1964’ is much more concerned with politics than culture despite brief cameo appearances by Betty Friedan, Martha Reeves and the Vandellas, Bob Dylan, and Sam Cooke.  Where professional historians typically avoid presentism as much as possible, popular historians producing television histories frequently frame their subjects in a way that is most relevant to themselves and their target audiences in the here and now.  In that way, Stephen Ives and his creative team tend to portray the competing forces of 1964 as merely a nascent version of the red state/blue state gridlock of recent years when there are as many differences as similarities to the politics of the Sixties and the polarized standoff that is so much a part of American life today.

Nevertheless, the filmmakers pack many raw and compelling moments into their narrative, such as the impassioned eulogy delivered by Freedom Summer organizer, Dave Dennis, at James Chaney’s funeral; and LBJ giving a long line of legislators the ‘Johnson treatment’ in order to guarantee the passage of the 1964 Civil Rights Bill.  They also do a highly skillful job of providing adequate space for multiple perspectives on the dysfunctional and damaged state of race relations at the time, the changing gender roles and generational conflict, and the new emerging forms of civic engagement and social protest.

In the end, all of the onscreen interviewees appear to agree on the watershed nature of 1964.  For example, liberal writer and historian Rick Perlstein summarizes that ‘the story America had been telling itself  .  .  .  was unsustainable and it kind of cracks from its own internal contradictions’; while conservative activist Richard Viguerie concludes that 1964 ‘was the creation of a new America.  It was a door to our future.  Once we went through it there was no going back.’  American Experience’s‘1964’ works effectively as historical drama and commemorative television.  It focuses attention on an often unrecognized pivot point in living memory and encourages viewers to reexamine its significance on both a personal and collective level whether or not they were born before 1964 or afterwards.

Gary R. Edgerton is Professor and Dean of the College of Communication at Butler University.  His latest books are The Sopranos (Wayne State University Press, 2013) and a reprint edition of American Film Exhibition (Routledge, 2013).  He also coedits the Journal of Popular Film and Television. 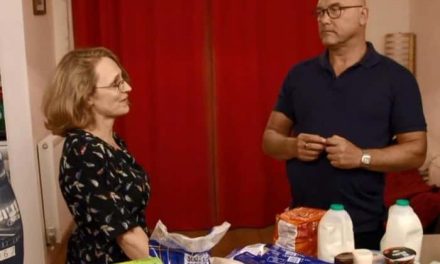 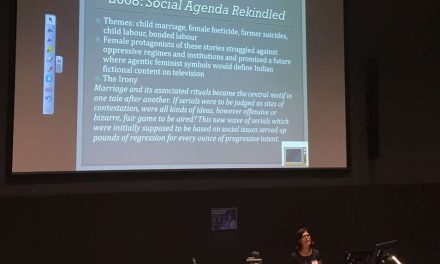 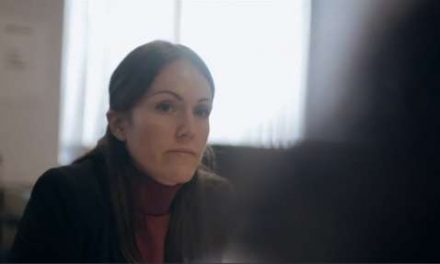