‘A shortage of properly trained television workers is creating a serious skills gap and threatening to undermine the future business performance of the entire broadcasting sector’.  A quote from a recent ScreenSkills Assessment perhaps? In fact, no.  This was Maggie Brown writing in The Guardian in November 2011.  More than a decade ago such warnings were being sounded regularly, and this was long before the growth of the streamers and the sudden hike in demand for content.  So why was the industry unwilling (or unable) to get its house in order for so long?  Why is it only relatively recently that the lack of investment in mid-career talent has even been raised as a problem?

As our newly-published research shows, the answer is not a simple one. Reasons for the odd way in which this industry has treated its talent are rooted in shifts in employment that began more than three decades ago.  The withdrawal of employer responsibility for its workforce and the massive expansion of freelance contracting has had pros and cons for those who have been caught up in these changes. One of the cons has been a historic lack of investment in ongoing career development and support. Hardly surprising then to find that, by mid-career, a lot of people find themselves moving into other kinds of work.  A recent report from the UK Film and TV Charity estimates that the number of ‘missing’ older workers (aged 50+) is between 24,000 and 35,000.  Yet the retention problem has been barely discussed. For a long time the industry’s mantra in the face of any prediction of a talent deficit was always ‘we need more entry-level recruitment’. The idea that young people who aspire to work in these industries (however vast their numbers) could compensate for the attrition of experienced workers was never plausible, despite the fact that for years this was the basis of much policy.

In the research that we publish this week, we investigate how and why the industry’s retention problem came to be framed as a problem of entry-level recruitment. Our aim is to help refocus the discussion on the reasons why people are leaving the industry, and the practical measures that need to be taken to nurture their careers and encourage them to stay. 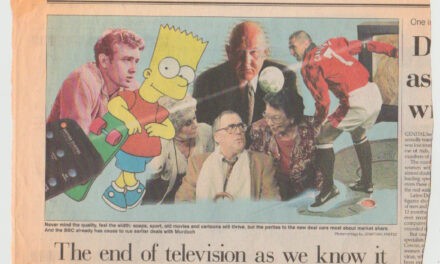 THOUGHTS ABOUT PRESS CUTTINGS AND THE 21ST CENTURY by Pat Holland