If you live in any country other than Turkey, Hungary, India, Brazil, the USA or the UK (and a number of others more) you might be excused for thinking that life is … kind of as it has always been. However, if you do live in one of those mentioned, you probably quite fancy to have your head in the sand or emulate Joey from Friends (NBC, 1994-2004)[i]:

Well, at least that’s what I would like to do.

Perhaps that explains why I have turned to bingeing gardening shows. There are all these amazing television dramas at the moment – think Years and Years (BBC, HBO, 2019) or Bad Banks (ZDF, Arte, since 2018, available in the UK on Walter Presents/Channel 4), but… they are just too much work. Years and Years I could only ever watch in chunks of 20 minutes – it was just too close to reality. And reality at the moment makes me want to go… well, see above.

So gardening programmes clearly take me away from this reality. In many ways, then, my bingeing on them (and I literally watch them in one go, when possible, on my favourite streaming site, the BBC iPlayer) can be understood to be a retreat from public and political life, which has become chaotic and threatening, into the private life of the/my garden. In terms of history, then, perhaps the parallel is that of the rise of the Biedermeier in Europe in the early 19th century after the collapse of the old world order as a result of the Napoleonic Wars. This collapse was particularly evident in the dissolution of the Holy Roman Empire (6 August 1806). At the same time, this period also saw the return of political stability but that meant that power was again concentrated in traditional hierarchical figures, i.e. monarchs and other aristocrats. As a result, the rising middle classes who were probably rather exhausted from all their democratic hoping, retreated into the domestic, leading to a rise of a style of literature, furniture and other arts which emphasised the wholesomeness of the home (for a full discussion of its relation to other literary styles, particularly Romanticism, of the period and the political context, see Nemoianu 1984). Lucy Worsley has discussed this in one of her fabulous historical programmes in relation to the UK. It’s worthwhile watching it (approx. from 20 minutes in):

But as always, I think things are more complicated than the retreat to the private.

Gardening programmes, as so many lifestyle series that are relatively cheap to make, rely on fashion and design, and are scheduled and watched in ways that emphasise the rhythm of the mundane and the everyday, have received only scant attention in the academic literature. Lisa Taylor is one of the few writers who have spent a good time of their academic career investigating them, which has led to a recent book publication on the topic (2016). Other publications fit, like Taylor’s book, into debates about cultural identities and taste (Bonner 2016) or are from the early 2000s and engage with the then important debate around lifestyle programming, consumption and neoliberalism (see Brunsdon 2003, Taylor 2002) and their relationship to the ordinary (Brunsdon 2003, Bennett 2008). The concern about neoliberalism and consumption itself now seems a sign of its time – it fits nicely into the worries of the period about the shift of Labour towards neoliberal policies. In this context gardening programmes are primarily read through the increasingly dominant lens of economics – the relationship of the programme to consumption behaviour, precisely in order to critique such a lens. Taylor however also highlights that even at this time gardening programmes and their assumed consumption behaviour of going to a garden centre and spending, spending, spending could be understood in relation to their ability to give audiences a sense of coping at a time of uncertainty. Controlling the uncontrollable, it seems is what is connected to this: nature’s ebbs and flows, the life cycle is tamed and made subordinate to the garden design.

All of this probably still plays into our enjoyment of these programmes today. Garden Rescue (BBC, since 2016) for example continues the theme of make-over television so successfully exemplified in the 1990s Ground Force (BBC, 1997-2005). But I wonder if there are not other things going on as well. The above seem to suggest that the garden is a space to escape political life; a space where political action is all but abandoned. But George McKay (2016) indicates that gardening has never been apolitical. He emphasises a history of gardening that can indeed be classed as ‘radical’. Radical gardening connects to shifting perceptions of landownership, which remains a contentious issue in the UK. It is also a hot bed for alternative politics, particularly as far as environmental issues are concerned. Evidence of that can certainly also be found in key gardening programmes, particularly Gardeners’ World (BBC, since 1968) which has introduced a wide viewership to organic gardening, for example. One of my personal favourites, The Beechgrove Garden (BBC Scotland, since 1978) has this year paid particular attention to the environmental impact of buying imported flowers and has instead introduced us to a florist who grows her flowers on her allotment (ep. 12). In addition, programmes such as the two mentioned emphasise the role of gardening in supporting local wildlife, as well as connecting gardens to a way of life, rather than indeed a lifestyle, that is about existing in harmony with the world around them and a deep sense of well-being. Indeed, the latter was the focus of one episode (ep. 29) of Gardeners’ World which examined the role of gardening in therapeutic settings for adults suffering from ill mental health, and with chronic pain or Parkinson’s. In total, then, these programmes seem to reverse the underlying shift towards lifestyle programming that Lisa Taylor (2002) had defined as central to the 1990s.

I want to suggest that there is a third element to this, however, which brings me back to where I started as far as politics is concerned: namely Romanticism. Last year, I spent some time blogging about overworking and I came to the conclusion that self-care in this context is a radical act. It is interesting, then, that self-care and mental health has become intricately linked to gardening programmes of the 2010s. But whilst these programmes are a space to investigate the relationship between gardening, our connection to the world of nature and mental health, they are also a space to constantly revel in the beauty of nature: they express, and not just through the words of the presenters, but in images, the deep sense of awe for nature that is not unlike that expressed by people such as Wordsworth or Burns in their nature-focused poetry. Interestingly, rather than romanticising these images through the use of music, Gardeners’ World in particular, but not only, gives us only the diegetic sound of birds or insects as accompaniment. As a result, the audio-visual composition creates the impression of immediacy with nature – of being there and revelling in this beauty ourselves. Helen Wheatley (2016) has highlighted how spectacular images on television connect to a long-lasting debate about aesthetics and beauty. Writing about the criticism that recent natural history programming has received of just being a visual feast, she draws attention to the connection to ‘Shaftsbury’s exploration of beauty in the eighteenth century and his contention that beauty was ultimately tied to a form of “disinterested pleasure” (McMahon, 2005: 314), from which followed Kant’s notion of the “restful contemplation” [[1790]1987: 101]’. (Wheatley 2016: 110). Ultimately, she goes on to show that Kant’s conception of beauty is deeply connected to a sense of exploration. Whilst today, there is a tendency to split aesthetic experiences from rational ones (due to aesthetic experiences often triggering emotional reactions), during the Romantic period, these experiences were seen as mutually beneficial. Experiences of beauty, then, can be seen as part of rather than in opposition to our ability to reason. Of course, this also draws attention to the fact that such a dichotomy of thought versus feeling, connected to notions of public versus private are constructions of essentially patriarchal thinking.

The sense of awe, of reverence, perhaps, when looking at the beautiful images allows for something larger than ourselves to emerge: it expresses a deeply spiritual connection to the universe, what in Christianity is perhaps called creation, and in Buddhism, interconnectedness. 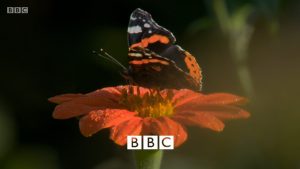 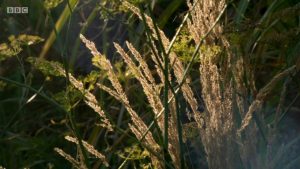 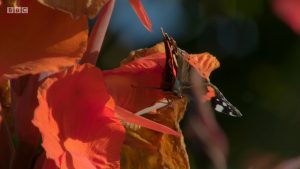 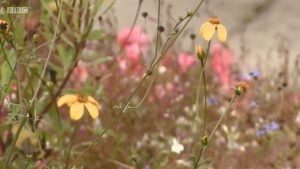 And this is where I see another element in gardening programmes that has the potential to be radical: by re-connecting us to our spiritual side, these programmes re-imagine viewers and human beings more generally as more than their functional parts. Thus, we are precisely not understood as solely being workers and/or consumers, but as connected to a world whose potential caretakers we might become through the process of gardening. More importantly, however, we are also fed, both physically and spiritually, by this world. We are thus not only addressed in relation to our responsibility (as potential caretakers) but also in our needs. And this is where the bingeing comes in, I think. Whilst everything in this world addresses us at the moment in relation to our responsibility – to fight for democracy, against the rise of fascism, to protect our future by living more sustainably, etc. etc., what gardening programmes do, is to highlight this responsibility by recognising and emphasising the benefits of this world to us. They therefore balance the address of the audience as citizen and consumer with one that recognises human life as much more holistic. And perhaps this shift towards an address to the holistic human being who is citizen, consumer, spiritual being and much more, is what this complex world of division at a time when international unity is paramount really needs.

[i] I haven’t had the chance to read it yet, but if you want to find out more what academics have to say about Friends, I can recommend the recent book by Simone Knox and Kai Hanno Schwind (2019).

CRITICISM, SUBMISSION AND TIME: MAD MEN AND THE KILLING by Jason Jacobs 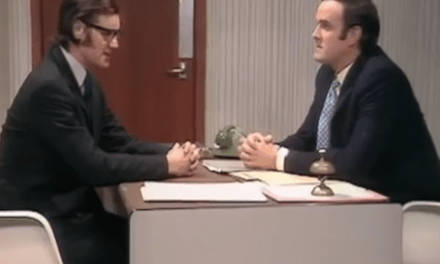 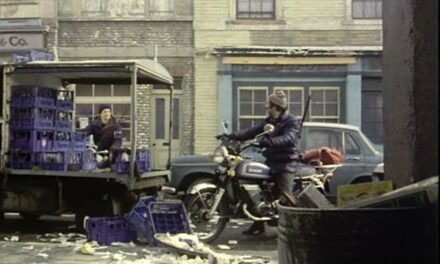