Here’s the pitch. Game of Thrones meets Mad Max in a post-apocalyptic wilderness somewhere North of Adelaide where a giant panda is on a lonely quest to atone for his wrongs to humanity. And there you have it, Wastelander Panda, an Australian web series created by Victoria Cocks and Marcus Mackenzie who apparently came up with the idea while sitting in a university lecture. After teaming up with producer Kirsty Stark and director of photography, Vivyan Madigan, the team created a three minute prologue for their project which was released on Vimeo in July 2012. 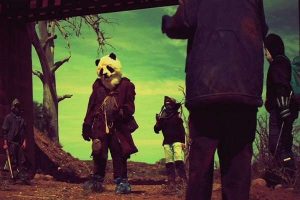 Within three days this improbable proposition had received over 100,000 views in 150 countries around the world, inspiring the team to launch a Pozible crowd funding campaign that swiftly garnered $25,000.

This success then helped pave the way for a grant from the South Australian Film Corporation (SAFC), making Wastelander Panda ‘the first project in Australia to be funded by a government screen agency’ for the online market’.  Screen Australia, the national funding body, also offered support for the development of the six part series that proceeded to achieve considerable success at a number of film and web series festivals internationally.

In 2014 the production crew teamed up with the Australian based company, Madman Films, and a revoiced and remastered version of Wastelander Panda was produced for the digital channel of the national broadcaster, ABC iview. Subsequently, a graphic novel based on the series was released in conjunction with the DVD version available in retail stores.

Fast forward two years, and the web series scene in Australia, and globally, is a busy one. At the Marseilles Web Fest in October, Berlin based web series historian and blogger, Joel Bassaget, who has recently published a book on the topic, declared in his keynote speech that 2016 marked the start of ‘the first golden age of the web series’. Judging by the quality of the 25 web series selected out of 150 submitted to Marseilles, he may well be correct.

At which point, it is important to be clear about what is intended by the term web series in this context. By web series, we are not talking about a conventional commercial television drama, documentary or comedy series produced for Netflix or Amazon Prime such as The Crown or Grand Tour, but something rather different.  In an article reporting on a panel held at the Emerging Writer’s Festival held in Melbourne in 2014, the web series was defined as ‘a series made for the internet with crucial differences involved in production, cost, time and, often, theme’.

While the themes may not always be so very different, the kinds of web series that are being showcased at the fifty plus web festivals that now exist across the globe are typically shorter in length, with an average episode lasting about 12 – 15 minutes. Another key difference is the production team of new and emergent creatives who do not have the financial resources of the big commercial networks, although the production values may be nonetheless high and ‘cinematic’. As is indeed the case of the recent Australian web-series Wizards of Aus.

Created by Michael Shanks with financial support from Screen Australia, Wizards of Aus is a mockumentary that spoofs the Tolkienesque New Zealand fantasy series. Whilst in production, the series was acquired by Australia’s other public service broadcaster, SBS, for its second channel where it was first shown there before moving onto the SBS’s video on demand platform.

In some countries, such as Australia, the screen funding bodies have clearly been taking note of these developments in the web series landscape, and have instituted schemes to help foster emergent talent. In 2013, Screen Australia established a Multiplatform fund with grants of up to $500,000 for digital productions. And in 2015 Screen Australia teamed up with Google Australia to launch Skip Ahead, offering financial development support to ‘YouTubers’ who could demonstrate an already existing subscriber base for their web-based narrative productions.

As is evident from the examples cited above, both of Australia’s public broadcasters, ABC and SBS, have been key players in this field. The ABC has commissioned and acquired a number of web series content for its digital platform iview including the The Katering Show, a parody of foodie culture that had already obtained over 3 million views on You Tube. http://thekateringshow.com/. The ABC subsequently commissioned a second series that was shown on the ABC’s mainstream channel in 2016. 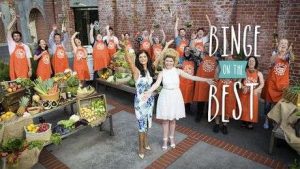 Meanwhile in countries such as Korea and India, successful web series such as Missing Korea and TVF Pitchers have been produced that have generated funds from branded content, suggesting that not all funding models are the same. There are, therefore, some interesting comparisons to be made, especially in relation to the role and value of the web series in different national screen ecologies.

As it is, scholarship on and about the web series has typically focused on the American and British experience, whether this be The Spot in 1996 and Dr Horrible’s Sing-Along Blog in the US (2008), or LonelyGirl15 (2007). Little attention has so far been given to the kinds of experiments that have occurred in other corners of the globe, especially the non-English speaking ones, and the questions the emergence of these series raise for the rapidly evolving screen ecology.

Questions include how the web series might function as a training ground for young creative in the screen industries; the extent to which web series are creating opportunities for new kinds of content and forms of screen narrative; whether the web series offers opportunities for minorities who have hitherto been excluded in terms of representation or work in the screen industries; and whether the web series can ever be an end in themselves in terms of monetization, or are merely a calling card for entry into the more established industry sectors.

Another set of questions relates to the role of the now extensive festival circuit where creators meet, share experiences and ideas, and in some instances attend master-classes with key industry players while also obtaining more visibility for their work. As suggested by the head of the judging panel for the Melbourne Web Fest, John Cabrera who is himself a web series producer and actor, what has emerged around the emergent new form is an invaluable sense of community, both online and off, with the audience playing an increasingly significant role.

Sue Turnbull is Professor of Communication and Media Studies at the University of Wollongong where she is Discipline Leader for the Creative Industries and Director of the Research Centre for Texts, Culture and Creative Industries. Her current research interests include the transnational career of the TV crime drama, and the value of the web series to the screen industries both nationally and internationally.   Her recent publications include The Media and Communications in Australia (2014) edited with Stuart Cunningham and The TV Crime Drama published by Edinburgh University Press (2014).  Sue is joint editor of Participations:  Journal of Audience and Reception Studies and a frequent media commentator on television and radio in Australia who also writes on crime fiction for The Sydney Morning Herald and The Age. 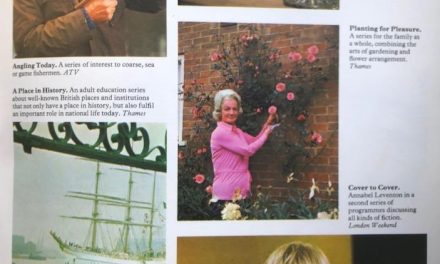 WATCHING ITV WHEN YOU COULDN’T GO SHOPPING by Jonathan Bignell 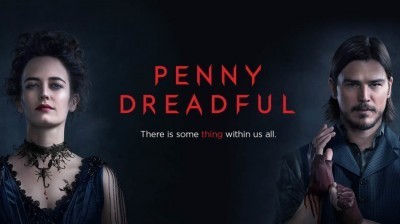