Unless you’ve been living under a rock, you’ll know that there has been a lot of anticipation about an event scheduled for this late Spring: yep, the cicadas have been hatching in the USA. Also, there’s been the Friends reunion special. Both of these events have been causing a lot of noise. For the purposes of this blog, let’s focus on the latter. 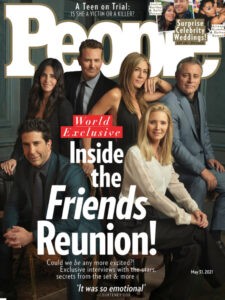 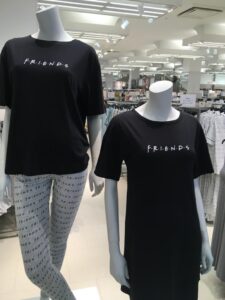 First of all, let’s take a moment and note just how big a deal this reunion special is: There’s been a blizzard of promotion, including the launch of the Friends Lego set and Friends-themed M&S pyjamas for your lockdown viewing comfort, pretty relentless social media activity and news coverage, and a People magazine cover (see Figures 1 and 2). The special was watched by roughly 29% of streaming households in the USA – where it marked the one-year anniversary of HBO Max, with WarnerMedia having shelled out $425m for a pocket-to-pocket deal to move the streaming rights from Netflix to its own SVOD platform – and almost 1.7 million UK viewers. To be sure, those numbers pertain simply to the first day of its release. If these figures aren’t mind-boggling enough, then let’s add to that the more than 1 million times the reunion special was watched within seven (SEVEN! SEVEN! SEVEN!) hours of its digital premiere in India. Not bad for a multi-camera sitcom from the 1990s.

What’s clear from the special itself and the responses to it is that Friends has a relationship with its fans that is marked by considerable warmth and affection. That close bond is no coincidence, but, as we have argued elsewhere (Knox and Schwind 2019), the result of a strategy of intimacy. This strategy actively establishes a closeness which goes beyond the usual patterns of para-social engagement by an audience following a group of fictional characters in a sitcom. We have explored in great detail how intimacy is achieved between Friends and its friends watching at home in a number of ways. This includes the show’s set design and lighting, the performances by the main actors and the resulting emotional truthfulness of the characters, as well as the warm and inclusive tonality of the humour. It’s not just based on ‘pretty words’, as co-creator and showrunner Marta Kauffman described it to us. It is quietly smart, joyfully playful and sometimes surprisingly edgy. Furthermore, the humour in Friends is inclusive, across cultures – as the emotional montage of fans from around the globe in the reunion special strikingly illustrates – but also across different social classes and contexts. Last but not least, its quality and high level of craft are highly regarded within the industry, with succeeding shows such as How I Met Your Mother (CBS, 2005-20014) and the American version of The Office (NBC, 2004-2013) not only emulating the warm tonality of the humour, but also several aspects of Friends’ mode of production. 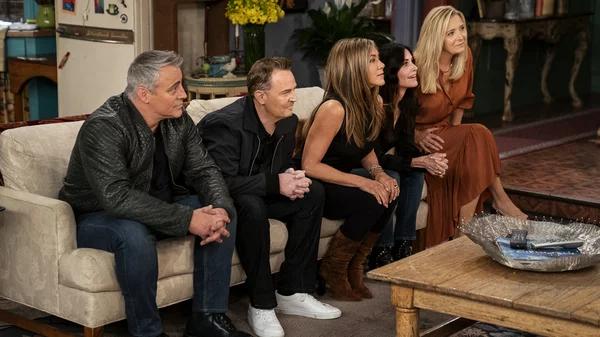 Fig. 3: “Just what the audience wanted”: all six Friends characters in one room. 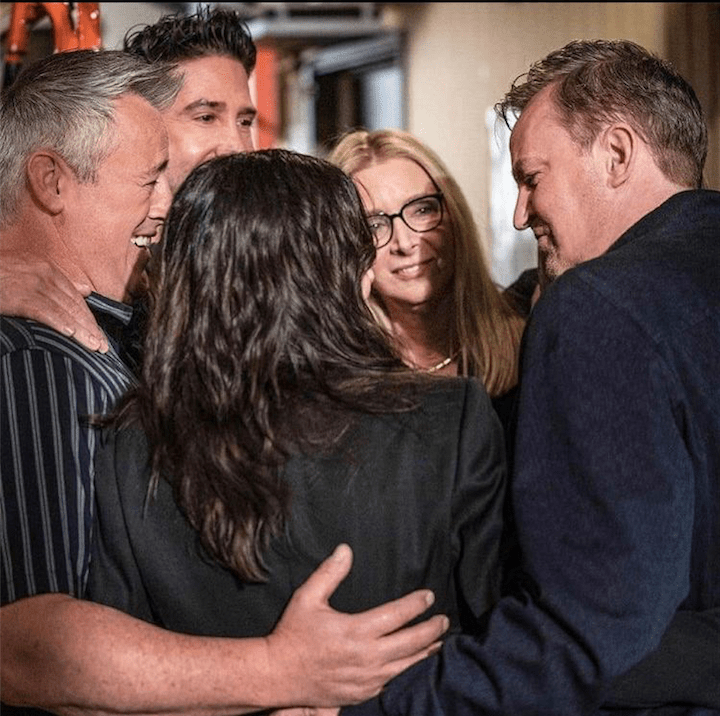 Fig. 4: Lots of actual hugging – which had always played an important role in the show – continues in the reunion special.

This bond of warmth and affection has continued since the show ended in 2004, partly because the show has never really not been on, through countless repeats across the globe, strong DVD sales and a high-profile streaming presence. This bond has been especially resonant during the Covid pandemic, lockdowns and social distancing. Indeed, one could argue that Friends always has facilitated and existed in a kind of friendly, privileged and wholesome lockdown of sorts. For more than 25 years fans have been voluntarily seeking out to be isolated with the friends in Monica’s apartment (mind you, they could always hang in Central Perk without facemasks). As Marta Kauffman explained to us ‘what the audience wanted, we found out, was the six of them in the room’. It is in those rooms (Monica’s apartment and the Central Perk café, most prominently) that those bonds of intimacy have been forged – between the characters themselves and between the characters and its audience. Perhaps this is why the moments of the reunion special in which the six actors are meeting on the re-assembled sets for the first time in 17 years and are allowed to freely mingle and reminisce, have had the strongest emotional impact (see Figure 3). It is not only nostalgia for an old television show at play here, but bears resemblance to witnessing an emotional family gathering. As such, those scenes in the reunion not only attest to the longevity of the show’s unofficial mantra of being about ‘that time in your life when your friends are your family’, but also serve as a refresher course for a show that set out to offer ‘a little bit of a tutorial’ on how to conduct friendships, as Kevin S. Bright put it to us in our interview with him. In direct opposition to the motto of Seinfeld, as proclaimed by its creators Jerry Seinfeld and Larry David, namely ‘No hugging, no learning’, the figurative and actual hugging in Friends continues in the reunion special, where it is especially resonant, given the dearth of physical contact many viewers have had since March 2020 (see Figure 4).

Fig. 5: Aisha Tyler, Lauren Tom, and Gabrielle Union – the actors of colour with the most high-profile roles on the show.

What’s also noteworthy about the special is that it doesn’t explicitly engage with the criticism and backlash the show has had in recent years. Again, unless you’ve been living under a rock, you’ll have seen the considerable criticism that has been levelled at the show, for its perceived racism, homophobia, fat-shaming, and more. The reunion special implicitly nods towards this with Lady Gaga’s guest appearance (where she thanks Lisa Kudrow ‘for being the person for all of us on Friends […] the different one’) and also by highlighting how much the show means to viewers around the world, with fans of colour being amply included. But while Larry Hankin makes an in-character cameo as Mr Heckles, and other actors who appeared on the show are present in person or via video link, there is certainly no sight of Aisha Tyler, Lauren Tom or Gabrielle Union, the actors of colour with the most high-profile roles on the show (see Figure 5). Diversity and inclusion are thus placed within context of reception rather than production, and constitute a very present absence in the reunion special – not unlike they were on the show, one might say.

This suggests that the desire for the warm bond in the pandemic outweighs an interest in engaging with the critique of the show’s politics of representation, regardless of how topical diversity and inclusion have become within the creative industries in recent years, and how prevalent discussions around wokeness have become in public discourse. The show’s cast and creatives have engaged with the backlash in different ways over the years, but regrettably there was just no space for this in a 104 minute long programme that featured Justin Bieber dressed as a potato. As the current crop of cicadas were hatched in 2004, the year Friends ended, let’s hope that when the next generation emerges in another 17 years, there will be more hugging but also more learning on-screen – perhaps from The Fresh Prince of Bel-Air reunion. (And if you’re thinking that’s too many jokes about the cicadas, then you clearly weren’t there in the lecture one of us gave earlier this year, in which Tom Cruise got compared to an iguana for longer than you’d think was plausible.)

Kai Hanno Schwind is Associate Professor in media studies at Kristiania University College, Oslo, Norway. He has researched and published on international television formats, format adaptation, sitcom, the mediatisation of humour and political satire. He has a background in culture journalism, creative writing and directing for radio, stage and screen.

Knox, Simone and Kai Hanno Schwind. Friends: A Reading of the Sitcom. Palgrave 2019.