The Royal Wedding kick-started, but by no means overshadowed the long, hot, English summer of 2018, which was defined not only by its heatwave, but also by some other very vivid and historical moments. Some of these include: VAR (video assistant referee) systems being used for the first time at the FIFA world cup; Angelique Kerber, defeating Serena Williams to become the first German since Steffi Graf in 1996 to win Wimbledon; an amateur boxing match between internet celebrities KSI and Logan Paul that was streamed live on YouTube; and the dating (constructed) reality TV show on everyone’s lips Love Island! The show that topped television ratings, got everyone talking, and invited a younger demographic of fans to enjoy an old-style of television broadcast – at a fixed time every night. 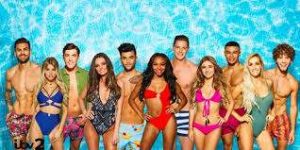 I had no intentions of watching Love Island over the summer. I had not seen the show beforehand, had no fixed ideas of what it was about, nor what to expect. But this year, there was simply no escaping it. Love Island was everywhere. If you did not catch a glimpse of it in newspapers, or scrolling through social media feeds, then you would have heard about it at BBQs and family gatherings, on the radio, or getting your hair cut. It seemed that everyone, everywhere, on some level, seemed to be exposed to, or engaged with Love Island. And conversation around it was divided in a very definite way so that it either outraged or delighted people in equal measure.

It was Love Island’s ability to generate such intense outrage in people that I found particularly intriguing. This roused my curiosity to catch-up and watch all 48 hours (I know!) of the show and I am so glad I did. I remember frantically trying to avoid any spoilers, social media updates or news reports as to who had been voted off, or what had recently occurred in the villa. This happened in much the same way as a football fan might avoid finding out the football score if they had not seen the match played out live, but this was no easy feat! It soon became very clear, that those mostly outraged by the show, tended to be people who had never seen an episode, or had judged it based on having seen 5 minutes. I became a huge fan, quickly catching up to the nightly time slots, becoming a part of the show’s community and joining in the national conversation with family, friends and complete strangers.

The show received wide criticism for its depictions of idealised body image, its damaging effects on youth culture and its normalisation of emotional abuse, among other things. But as Leah Green has pointed out, the show is not to blame for this as it is holding up a mirror to some of society’s horrible truths, and reflecting them back to us in much the same way as sitcoms and soaps have done historically, and continue to do so. She makes a valid point when highlighting that these reflections should not be confused with how a society should be, but are instead more of a reflection on how society currently is. Green is all for a show that prompts difficult questions about race, gender and sexual politics, as this lends itself to encouraging discussion and awareness around these issues, rather than not addressing or recognising them.

It is very easy to find flaws in and critique Love Island. For instance, if the show were analysed from a gender perspective, it can be criticised based on its reinforcement of gender stereotypes and its normalisation of heteronormative relationships. But there are many positives that also deserve to be focussed on. For instance, this show got people talking. It engaged people in a way that weekly television viewing used to be a talking point for people. The show brought people together in much the same way as music or sport bring people together. Strangers were engaging in conversation about what had happened in the last episode, who they thought would win, or be voted off next. The ability for a TV show to do this has been greatly challenged as freeview now competes with Netflix and YouTube. 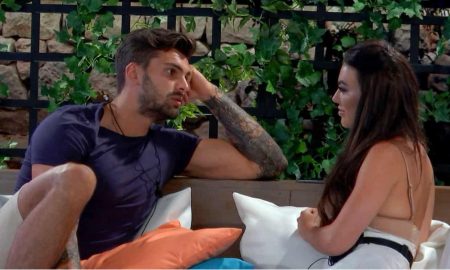 In addition to this, author and journalist Caitlin Moran believes that the show offers many valuable life lessons, particularly if you are a parent. Moran is a mother to teenage girls and has found the show a good source of information and a template for what happens when you go into the outside world and are trying to find a life partner. Moran finds value not just in the show encouraging discussion between parents and their teenage children, but in its ability to model unhealthy behaviour in relationships too. Here she refers to signs to be cautious of such as those demonstrated by Adam Collard towards Rosie Williams.

In this interview Rosie talks about the moment she stood up to Adam on ITV’s Good Morning Britain. This moment, as Sussana Reid points out, was empowering for Rosie and many other women given the positive feedback that was received afterwards. Though, it is difficult knowing which makes more awkward and uncomfortable television, as both Adam and Piers Morgan’s interactions with Rosie are equally unpleasant to observe.

But beyond the show’s ability to make some real noise and inspire discussion around some of society’s difficult truths, the feel-good vibes the show provided cannot be ignored. There are lots of memorable and happy moments; the supposed lie detector test for instance or the pretending to be a parent for the day with life-like babies that get accidentally dropped. It was also easy to relate to many themes in the show such as the coupling and the recoupling, which in the real world is getting with someone, or breaking up, how the dynamics changed when newly introduced cast members appeared, and the various insecurities that were shared by the contestants. But as an older member of the audience, I found having access to the new language around love and relationships very enlightening. I was not aware of what being “mugged off” meant before watching the show, nor did I know what “grafting” meant for that matter.

The series ended with its final episode being screened at many cinemas and public venues around the UK, many of these were free. This too brought people together in much the same way as music or sporting events like the football or Wimbledon did, and indeed The Royal Wedding. Box Park in Croydon for instance had been used for world cup screenings and tennis in the lead up to the series finale, which went out with a bang and cracked record viewings. The favourite couple won and the now we wait and see what will become of Jack and Dani in the real world. 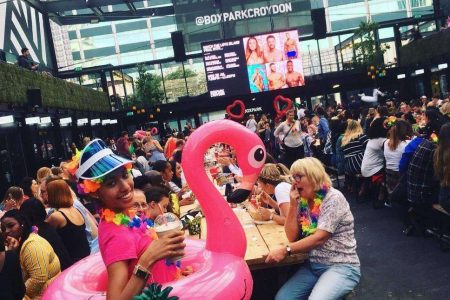 Nektaria McWilliams is a second year PhD film studies student at Oxford Brookes University. Her project’s main interest is Greek diasporic audiences of Australia, their memories of cinema-going, and the impact of watching Greek films in the post-war years, particularly in rural and geographically isolated settings. She is currently analysing data collected from a recent field trip to Australia where she interviewed the film distributor and surviving audience members.