Earlier this year I blogged about a research project I collaborate on that documents and studies all of Harold Pinter’s drama. Pinter died ten years ago, and as is often the case, the anniversary has prompted a surge of media interest in him and a series of retrospectives of his work. In London’s West End, for example, the Pinter at the Pinter season has featured a host of star actors in new productions of his theatre plays. The British Film Institute has just announced a new four-disc DVD set of BBC productions of his plays, available to pre-order now ahead of the formal release date on 21 January 2019. Too late to be a Christmas present, but much anticipated by those of us who work on the “golden age” of British TV drama.

As my colleague Billy Smart has discussed in a previous blog, the availability of Pinter’s TV work on DVD or Blu-ray has been patchy at best.  Billy summed up the situation by writing “if it was made for television it is unlikely to have been commercially released”, despite Pinter’s status as a canonical dramatist.  BFI’s new DVD doesn’t remedy this, focusing on adaptations of dramas that were originally written for theatre or radio before being broadcast on BBC television. But the TV medium was the route for most people to encounter Pinter’s work, and unlike TV plays by his mentor and friend Samuel Beckett, Pinter’s dramas were often appreciated by their TV audiences.

There are landmark dramas in the new box set, the earliest in date being four plays from the 1960s when Pinter was becoming established as a leading British writer. The Tea Party (1965) was adapted from his own short story and directed by Charles Jarrot, in a BBC anthology called The Largest Theatre in the World in which 10 nations in the European Broadcasting Union each screened their own version of Pinter’s script. It feels extraordinary even to contemplate such a transnational cultural collaboration now, in the throes of Brexit, but let’s hold back our tears and move on. 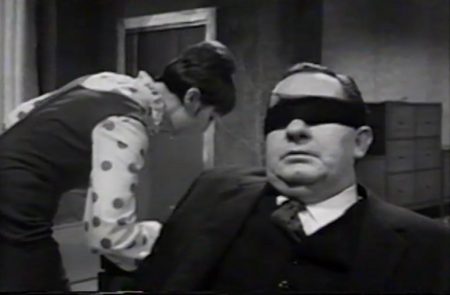 Vivien Merchant and Leo McKern in The Tea Party (1965)

The BFI set also includes the 1967 triple bill of Pinter plays grouped for the Theatre 625 series on BBC2. It comprises The Basement directed by Jarrot with Pinter playing one of the three protagonists, and A Slight Ache and A Night Out directed by Christopher Morahan. A Slight Ache was actually Pinter’s first broadcast play, made in 1959 for BBC’s highbrow Third Programme radio service, and A Night Out had previously been screened in 1960 by ITV in its popular and innovative Armchair Theatre anthology series of one-off plays, with Pinter himself acting one of the lead roles. BBC TV was coming rather late to the party, but by the mid-1960s Pinter was among a group of major new writers for the stage that BBC was keen to showcase on television.

Morahan had an affinity with Pinter’s plays and went on to make Monologue for BBC in 1973, also included in the DVD set, in which a man reflects on a failed love affair, addressing his monologue to an empty chair. The actor featured is Henry Woolf, who was at school with Pinter and was a lifelong friend. BFI includes Morahan’s version of the puzzling Old Times (1975) for BBC2, and moves into the 1980s with The Hothouse (1982) which Pinter directed. Kenneth Ives directed Landscape in 1983, featuring Colin Blakely, which BFI includes on the DVD but does not offer The Dumb Waiter, one of Pinter’s most well-known plays, produced for BBC in 1985, in which Blakely also performed. However, he can be seen in the superb version of The Birthday Party in 1987, made for BBC’s Theatre Night anthology of plays for Sunday evenings, in which Pinter acts the role of Nat Goldberg. In my view it is the best performance of Pinter’s screen acting career. The most recent drama on the DVD set is Mountain Language which Pinter directed in 1988, with a large cast of celebrated actors who had appeared in the National Theatre’s stage production earlier that year. 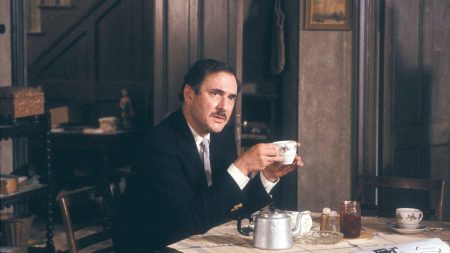 Harold Pinter as Goldberg in The Birthday Party (1987)

The focus in the new BFI collection on adaptations rather than original dramas for TV, and on productions for BBC rather than commercial companies, inevitably produces a rather skewed picture of Pinter’s television legacy. As I noted in my previous blog, it was ITV rather than BBC that first recognized his talent, because BBC’s Head of Drama Val Gielgud (brother of the actor John Gielgud) had no interest in the upcoming “Absurdists” like Pinter or Samuel Beckett. Pinter’s work continued to appear on ITV in later decades, but as is often the case with ITV dramas shot on video in the TV studio, there are few examples publicly available now.

The research we do on Pinter at Reading is part of a collaborative project, ‘Pinter Histories & Legacies’, funded by the Arts and Humanities Research Council from 2017-19. The project documents every professional theatre production of Pinter’s plays in the UK, as well as his television, radio and film work, and all of that information will be in a public database to be released next year. I lead the Reading team, working with Billy Smart and Amanda Wrigley, who research Pinter’s broadcast and film work while colleagues at Leeds and Birmingham Universities deal with the (much larger) body of Pinter’s theatre output.

We first approached BFI with the idea of a screening season and DVD release in 2015, and their enthusiasm for the idea blossomed into ‘Pinter On Screen’ in Summer 2018 at BFI South Bank in London. The film and TV screenings were accompanied by talks and interviews with actors and producers. We were able to contribute to those events, and Billy and Amanda are writing some of the printed materials accompanying BFI’s DVD set. By next year, there is going to be a much richer range of resources available about Pinter’s contribution to broadcast drama (and his stage and cinema work), as a result of these collaborations.

Jonathan Bignell is Professor of Television and Film at the University of Reading. He works on histories of television drama, cinema and children’s media, and on the AHRC research project ‘Pinter Histories & Legacies’ which is a collaboration with colleagues at Reading, Leeds and Birmingham universities. Some of his work is available free online from his university web page or from his academia.edu page.