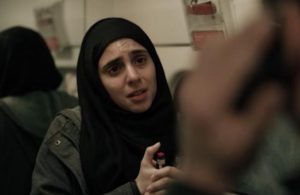 The BBC’s audience-pulling Bodyguard (2018) ended with a twist which changed the status and behaviour of the Muslim woman with whom it had started. This did not stop criticism of the how the serial had represented Muslim women (Fig 1). Journalist Tasnim Nazeer said that she was ‘exhausted by how Muslim women are continually misrepresented like this in the media. . .  What would it take for a film-maker to consult diverse writers such as myself and change the narrative? It may not make for such exciting TV, but the alternative is for future dramas to emulate Bodyguard and feed hate and play into the hands of those who want to divide us’. (The Guardian Mon 24 Sep 2018) 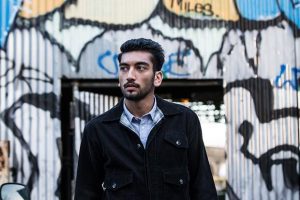 Within days, another BBC series was being trailered with the hope that it might go beyond the stereotyping which it was claimed Bodyguard had fallen for. Stuart Jeffries suggested that The Informer which started screening on 16th October 2018 might be ‘particularly refreshing for anyone sick of Muslim stereotypes on TV’. Although the plot does centre on the threat of terrorism, The Informer stars Nabhaan Rizwan as Raz (Fig 2), a lad growing up in East London with a dad who drinks and a mother who doesn’t wear a headscarf; this seemed more realist to the young star since ‘Growing up in Ilford, lots of my friends who were Muslim had families where the mum was the breadwinner.’ (Fig 3) 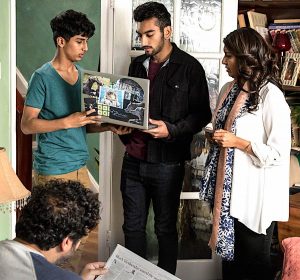 Fig 3: Raza’s family in The Informer

In their articles, both Jeffries and Nazeer refer to ‘the Riz test’. The Riz test came out of a speech on diversity on screen given by British actor Riz Ahmed in a 2017 speech sponsored by Channel 4 to a parliamentary gathering (Fig 4). Ahmed himself has had a successful career beginning with the Michael Winterbottom’s The Road to Guantanamo and taking in Chris Morris’ satire on terrorism, Four Lions in 2010 with subsequent success in US film and television.

Ahmed’s speech inspired Sadia Habib and Shaf Choudry, using ‘academic research and our own experience’ to come up with what Habib calls ‘five simple criteria to be utilised by film fans to call out racist and Islamophobic stereotypes’:

If the film/show stars at least one character who is identifiably Muslim (by ethnicity, language or clothing) – is the character…

If the answer for any of the above is Yes, then the Film/ TV Show fails the test. 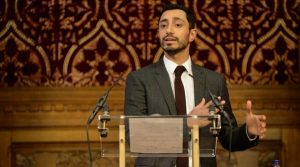 I am greatly enjoying The Informer which seems to pass this test but here I just want to comment on how the Riz test compares with the Bechdel test with which it is sometimes compared. The Bechdel test has entered into the critical vocabulary and provides a measure of gender representation by asking whether a work features at least two women who talk to each other about something other than a man. To my mind, at first, the Bechdel test seemed to have a wit and elegance which the Riz test doesn’t have. It does not address representation of women head-on but it asks for a moment which allows a specific kind of conversation to occur. The conversation may have nothing to do with the narrative drive of the story, it may not involve the central characters, there is no prescription about when or where it may happen. But what the test suggests is that, if this kind of conversation occurs, even as a grace note, then it is likely that the work as a whole will offer a place for its female characters which runs against the dominant female stereotyping.

By contrast, the Riz test takes the issue head on and is much more prescriptive. The film/show will fail if a character who is identifiably Muslim (though not identifiable in stereotypical ways) is presented in certain ways. It starts with a nod toward Bechdel since the first point relates to what the character talks about. But then it asks us to take a step back and to look at how the character is presented. In doing so, it certainly moves into the terrain of representation and media studies and raises a number of questions including: who or what is responsible for the presentation, what is the context, should misogyny not be put on screen, should women not be represented as oppressed? These are all important and complex issues and they need to be discussed. But the fact that the Riz test has five very explicit elements means that it is either over-prescriptive or runs the risk of becoming an essay question rather than a quick means of exposing a problem.

But then I started to think about why the two tests took such a different form and it seemed to me that, in an odd way, the Riz test takes the complex form it does because the problem is so urgent. The Bechdel test is illuminating but you wouldn’t use it to write to Ofcom or the BBC to complain about the treatment of women in a particular work. But the Riz Test, which can be found on lots of campaigning websites, gives you the means of doing that. You can submit a report to the The Riz team itself but if you wanted to go further and complain to the BBC about Bodyguard (or to Ryan Coogler about Black Panther (2018)) you could use the Riz elements to frame your comments very directly in terms that the programme makers, commissioners, actors, directors would have to take on board, one way or another.

After The Informer finishes, there’s something else to look forward to. Riz Ahmed, who has endorsed the test named after him, is currently working on a nine-part BBC drama series called Englistan, which will chart three generations of a British-Pakistani family and, as the BBC blurb has it, “re-frame recent British history”. Since he will be casting the parts and hiring other writers it seems likely that this will pass the Riz test. 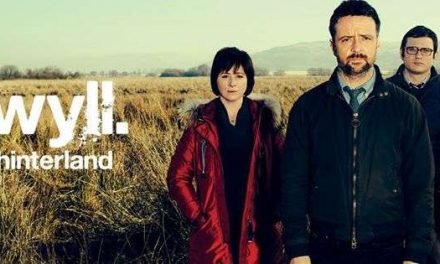