CLIFF RICHARD AND THE SPACES OF 1960s TV by Jonathan Bignell

The look of the stylish British spy and detective shows, filmed in colour in the 1960s, results from where and how they were made, and pop sensation Cliff Richard had a lot to do with it. The musical The Young Ones (d. Sidney J. Furie), starring Cliff, was shot at Elstree Studios near London in 1961, and a quite extensive backlot town was built for the film. This exterior location within the studio complex was re-used to provide a wide range of settings for the independent production company ITC’s filmed action-adventure series, including The Saint (1962-9), The Baron (1966-7), The Avengers(1966-9), The Champions (1968-9), Department S (1969-70) and Randall And Hopkirk (Deceased)(1969-70). These series feature detectives, spies and millionaire adventurers, and they have commonalities between them generically and also stylistically as part of an ITC brand. The studio backlots shared with The Young Ones are an aspect of their distinctive mise-en-scene, and link them to British popular cinema designed for international audiences.

A backlot street in The Young Ones

While The Young Ones was set in relatively anonymous West London streets, the building facades were subsequently redressed and modified to stand in for numerous British and overseas places. The Cliff Richard film cycle went on with Summer Holiday (Peter Yates, 1963) and Wonderful Life (Sidney J. Furie, 1964), each international in setting and alluding to the exotic flâneurie evident elsewhere, like in the James Bond films that began with Dr No (Terence Young, 1962), using nearby Pinewood studios. Cliff crafted a transnational look for himself too, borrowing his quiff hairstyle from Tony Curtis and his curled lip from Elvis Presley. Cliff, James Bond and ITC’s action-adventure TV series were underpinned by similar transnational cultural currents, especially transatlantic ones.

The charismatic impresario Lew Grade, who ran ITC, had already exported the black-and-white filmed TV series The Adventures of Robin Hood (1955-9) and Danger Man (1960-9, a.k.a. Secret Agent) to the USA, and financed The Saint to develop the market for British drama there.  Hour-long colour episodes sold best to the American networks and local stations, so The Saint adopted this format even though colour was not broadcast in the UK at that time. Making The Saint used Elstree’s cutting rooms, viewing theatres, prop store, construction workshop and costume departments. The backlot town built for The Young Ones provided settings for the episodes, including the protagonist Simon Templar’s (Roger Moore) apartment building. 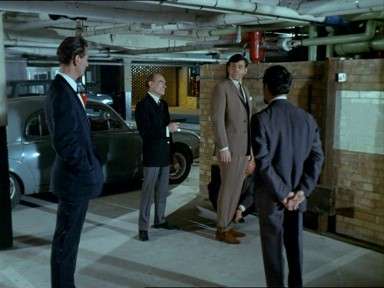 The backlot was dressed to represent different countries and regions, from Paris to the tropics, in The Saint, The Champions, The Baron and Department S. Its facades became the exteriors of foreign embassies and police stations, and various European streets. It was also the English town where the ghost of revenant private eye Marty Hopkirk wandered in Randall And Hopkirk in 1969. Elstree’s spatial resources enabled The Champions’ creators Spooner and Berman to cut costs by shooting Department S and Randall And Hopkirk (Deceased) at the same time during the latter half of 1968, sharing soundstages, props and production staff. Studio buildings served as settings in both series; the administration block represented an Interpol bureau and Heathrow Airport in Department S, while the studio’s underground car park appeared in The Champions and seven episodes of Randall and Hopkirk. 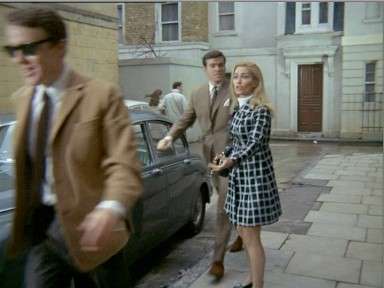 A backlot street in The Champions

The Champions made the greatest use of Elstree’s backlot town and the surrounding studio site. Its premise particularly suited the simulation of place, travel and virtual movement between places. The three protagonists are international agents working for Nemesis, a global security organization attached to the United Nations. Their tasks, of foiling despotic dictators, assassins, and operatives of shady espionage agencies mean traveling the world rather more often than ITC’s other spies and adventurers. They also have special powers that make further spatial movement and linkage between spaces possible. In the opening episode, ‘The Beginning’ (1968) they crash their aircraft in Tibet after a successful operation. Rescued by a lost tribe, they are endowed with superhuman powers that they gradually learn to use. As well as exceptional strength and agility, they now possess enhanced sight and hearing, and telepathic communication with each other. These powers, especially telepathy, transform their relationships with space by enabling them to traverse it virtually, to hear over a great distance or to receive a message from a fellow agent far away. This motivates cross-cutting from one setting to another in the story, and linking different places together within the same scene. 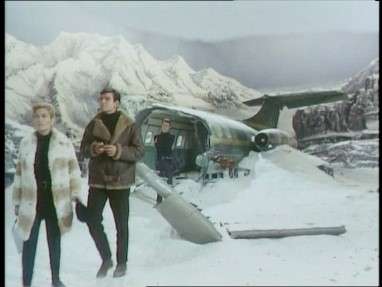 Tibet on an Elstree soundstage in The Champions

Production of filmed television series kept Elstree (and other nearby studios such as Pinewood) in business because they used the backlots and soundstages for up to eighteen months at a time, whereas the occasional British cinema project might only shoot for five or six weeks. Elstree worked like a Hollywood studio, with offices, editing suites, a film and music library, back projection, a large water tank, an exterior cyclorama, a cafeteria and storage vaults all on the same site. This facilitated industrialised television production for domestic and international sales. 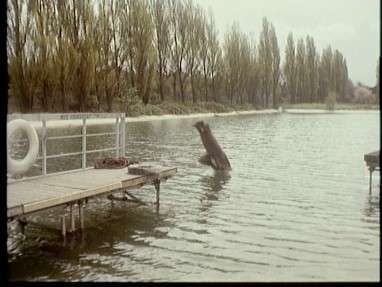 Studio buildings also served as locations themselves, for scenes shot around the exteriors of the soundstages and office blocks, roads, gateways, water tanks, the underground car park and of course the backlot town. This saved money on transport and saved time in setting up equipment. The gateways of the studio were dressed to become, for example, the entrances to a naval base and an army installation in The Champions. Elstree’s large water tank behind the soundstages became the dock of a naval base, and also represented the port of Rotterdam. Set dressing and camera position might prevent even attentive viewers from noticing the repeated occurrence of these settings, but continuity of visual style over long runs of action series episodes derives in part from the use of these same places over and again.

Drawing on facilities set up for Cliff Richard in The Young Ones, the TV series made at Elstree could transform place, to represent British and international settings, and to dramatise travel and movement. The films and TV episodes could represent international modernity, associated with the USA, just as their makers used Hollywood film and TV production techniques for making them. The British series adapted versions of US industrial organization, and also US television formats like the episodic adventure series, to make programmes that would be saleable to US networks. If not for Cliff and the legacy of The Young Ones, ITC’s golden age would (literally) have looked very different.

Jonathan Bignell is Professor of Television and Film at the University of Reading. He leads the AHRC-funded research project ‘Spaces of Television: Production, Site and Style’, and first wrote about Elstree and ITC series for Media History in 2010. His publications are listed and some can be downloaded from here. 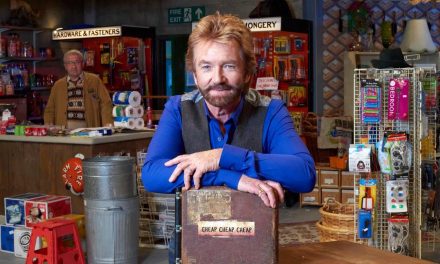 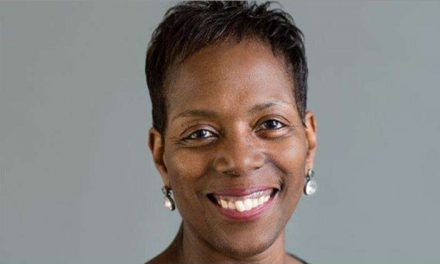 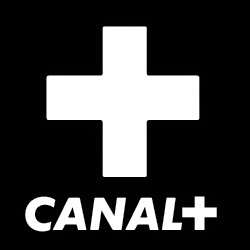